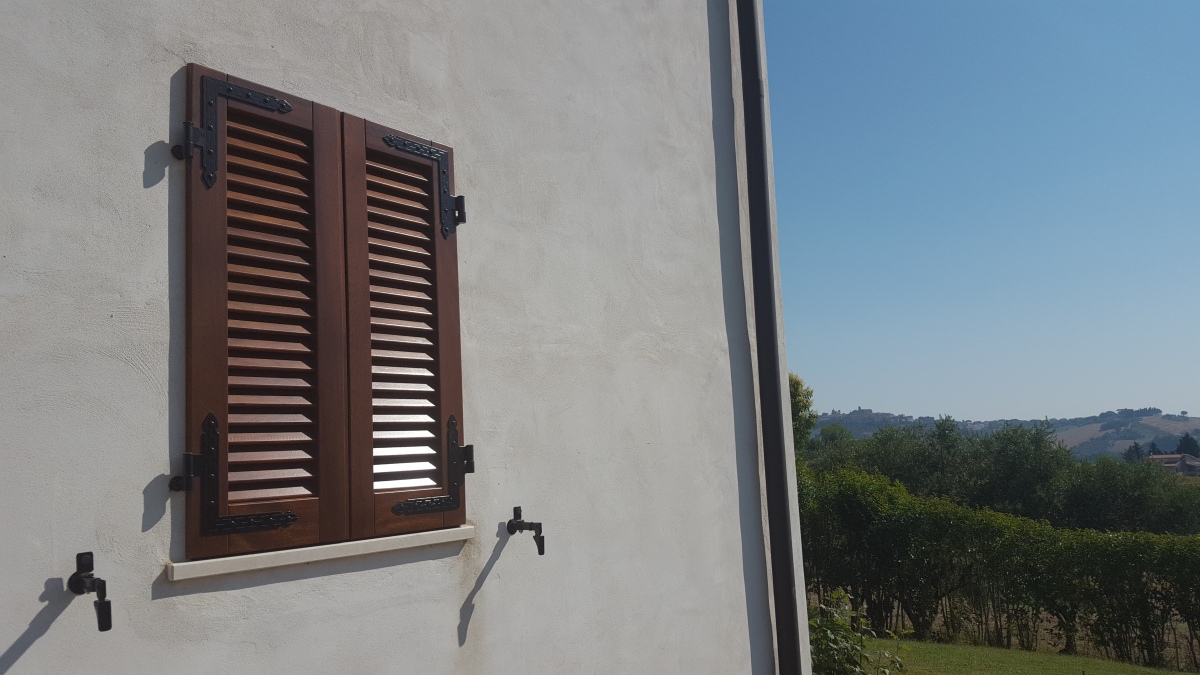 Home improvement programmes in the UK always drone on about the need ‘to let the light come flooding in’, and floor-to-ceiling bi-fold doors have become the ‘must-haves’ de nos jours. Not in Italy. In fact, almost the opposite is true here: such is the clarity and ferocity of the sunshine – especially during the long hot summers – that keeping it and its accompanying heat out is a priority. As a result, most domestic buildings have relatively small windows. And shutters, which most of the time in summer are kept – well, shut.

Our house came with all of its ground floor pairs missing, though, giving it the slightly lopsided look of someone with only one eye made up. It’s a converted farmhouse, so all the living accommodation was originally upstairs and accessed via an outside staircase, while the ground floor was given over to livestock and storage. The previous owners converted it into the spacious four-bedroom open-plan home we enjoy today. No small job this, as it included lowering the entire ground floor by about 60cm in order to achieve the required ceiling height and building a 2-storey extension as well as installing an internal staircase. It therefore seems churlish to criticise them for not getting round to putting shutters on the downstairs windows.

We have now rectified this omission, however, as earlier this week we had all seven missing pairs installed by a local carpenter we had had recommended to us. “You should try Stefano. He really knows his stuff”, our dear friend Pam had said in her distinctive squeaky voice. Having converted two houses of her own here and overseen the conversion of many others, she knows a good tradesman when she sees one. “And he won’t mess you about, either”, she had added, her trademark blonde topknot bobbing up and down as if in agreement.

So once Mr. Blue-Shirt had taken measurements and drawn up what we wanted, we drove over to Stefano’s to discuss our requirements, ask for a quote and, as we have often found this a good predictor of quality, to check out his workshop. As soon as we stepped inside its gloomy interior, the still air thick with the scent of freshly sawn timber, we knew we were dealing with a true craftsman. In addition to several spotlessly clean pieces of hi-tech wood-working machinery, there were two or three large work benches, each with a different job precisely laid out on it, its corresponding drawings stuck down next to it with gaffer tape, and as our eyes adjusted to the gloom, we noticed an impressive armoury of hand tools, all neatly lined up on long wooden racks. Some reminded me of ones I had seen in in my grandfather’s shed when I was a child, and some were of a much more recent vintage. But all of them were lovingly oiled and sharpened, their handles worn shiny from constant use.

“Buongiorno! Posso aiutarla?” – Good morning! Can I help you? The cheery greeting had come from the farthest corner of the workshop, from where emerged a slightly-built man with dark-rimmed glasses that emphasised his penetrating blue eyes. Still smiling at having made us jump, he dusted his right hand off on his old-fashioned button-up overall and thrust it towards me. “Sono Stefano”, he said simply. “Piacere”- pleased to meet you. The grasp of his work-roughened hand was surprisingly powerful given his build, and I now saw that he was younger than the steel grey hair that clung to his head in tight flat curls had initially suggested. We immediately warmed to his gentle manner and the three of us were soon hunched over Mr Blue-Shirt’s drawings, scribbling notes and sketches here and there while Stefano went back and forth with samples of different types of wood and fittings.

Within a few days he had emailed us a price. It wasn’t cheap – but we weren’t expecting it to be: the work of a craftsman never is. In view of the work involved, though, it was  fair, so we placed our order the same day. We couldn’t help wondering, however, whether he would meet the installation date he had proposed: this is Italy, after all. But just as I was beginning to think it might be an idea to check on progress, Stefano called to ask if he could come and install our shutters the following week – bang on schedule.

So at 8 o’clock sharp on Wednesday morning he trundled onto the drive in the type of small flat-bed truck favoured by practically every tradesperson here. Jumping out of the cab, he introduced his assistant Luciano, who, in sharp contrast to Stefano’s slender build and light sing-songy tones, was balding and plump with a rumbling voice (and a cigarette permanently wedged in the corner of his mouth). They got down to work immediately, even declining a coffee (although I suspect this was largely down to concerns about the espresso-making skills of the English). Stefano had clearly planned the day out in his head and went straight to the first window on his mental list, and with Luciano’s help, got his tools and equipment set up with the practised ease of someone who knows exactly what he’s doing. Meanwhile, we took a closer look at the shutters stacked on the back of the truck. For something so functional, they really were a thing of beauty, for the craftsman’s touch was apparent in every detail: the perfect alignment of every slat, the carefully chamfered edges, the precisely positioned hinges, the silken finish of the varnish. Even the slots in the screw heads all faced the same way.

The two of them worked methodically from window to window, Stefano clearly in charge and Luciano clearly the gofer and tool-passer, but obviously a long-established team: no instructions given, no questions asked. And so we left them to it, only occasionally asking if they needed anything. “No, no, Signora” came the answer every time. “Tutto bene, grazie.” – Everything’s fine thanks. They stopped only for long enough to eat their lunch seated on the grass beneath the willow tree in the top corner of the garden, and to down a coffee, their need for a post-lunch espresso finally over-riding their earlier apprehension. There was undisguised surprise in their voices, though, when they both declared Mr. Blue-Shirt’s brew “buono!” as they returned their empty cups to the kitchen before returning to work.

By six o’clock all seven pairs of shutters were in and opening, closing and locking smoothly, every last bit of detritus had been cleared away and vacuumed up, the tools were all back on the truck, and Stefano had a large wad of cash in his back pocket. As their truck crunched back off the drive and down the hill, we turned to look at the house. With its face now looking balanced and complete, it almost seemed to be smiling at us,  pleased that it could now provide us with our deliciously cool interior. Floor-to-ceiling bi-fold doors? No thanks.