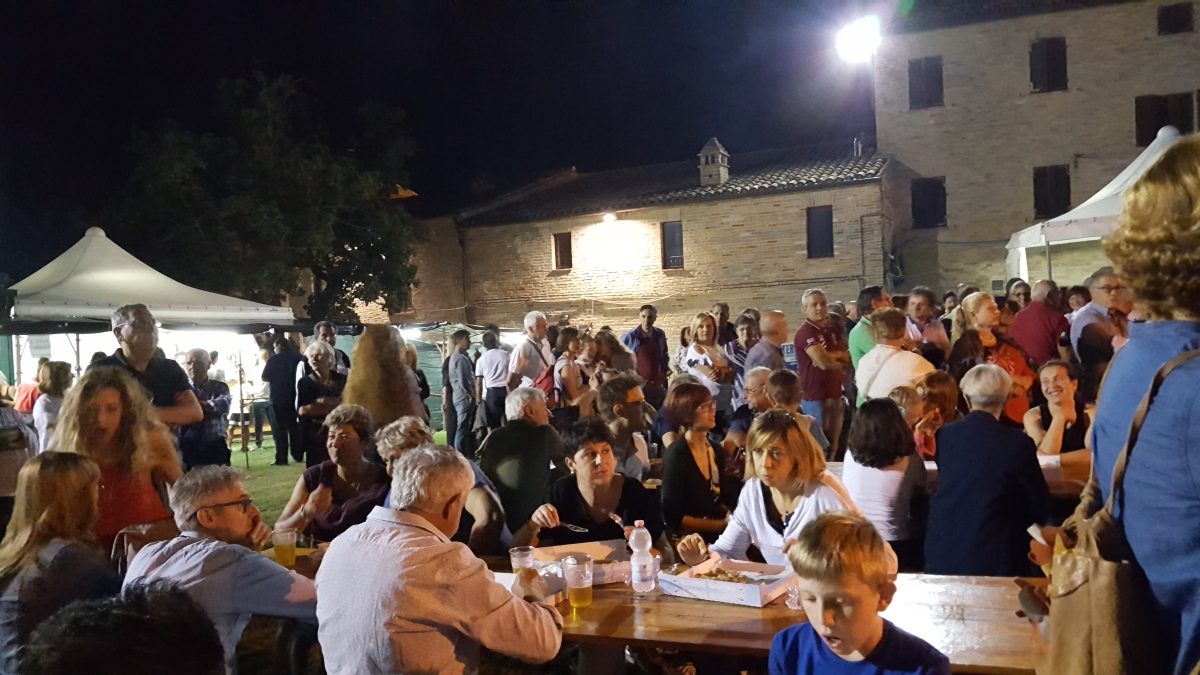 We plodded the final few metres up the hill into Montelupone’s main square, the Piazza del Comune, more than ready for a cool drink after our 4km walk from home. We had come into town for the 24th annual Festa della Pizza and had assumed that the four-day event would be held here in the centre of the village, as this is where all the other festivals we had been to had taken place. But although the square was buzzing with life, it was just the Caffé del Teatro and the Pizzeria del Borgo doing their normal roaring trade on a warm summer’s evening. Slightly puzzled, we looked around for some evidence of the festa and soon noticed a series of hand-written signs bearing the words ‘stands gastronomici’ with large arrows scrawled below them. These guided us out of the square and up the narrow street behind the town hall and eventually led us to an imposing pair of forged metal gates at the end of the high moss-clad wall that runs along the back of a small neat square where the village war memorial is located. We had always imagined that they were the gates to the courtyard of one of the tall slim houses facing onto the square. Normally chained shut, they were now flung wide, granting access, not to a private garden, but – to our great surprise – a large grassed area about the size of half a football pitch with a magnificent cedar tree bang in the middle, its ancient limbs fanned out in a giant parasol of gracefully arching green.

For a moment or two we both stood there, slightly disorientated: we had had absolutely no idea that this secret little park even existed. But here it was thronged with easily half the village’s 3000 population, music blaring, strings of lights dancing in the breeze, and the evening air rich with the aroma of freshly baked pizza. To our left along the front wall was a stage with microphone stands and drum kit set up ready for the live band that was due on later, and in front of this was a raised dance floor across which small children were charging and sliding, squealing with delight. Around the right-hand edge of the space stood a couple of small open-fronted marquees housing banks of cash desks, in front of which queued groups of people, chatting animatedly. Along the far wall stood another much larger open-fronted marquee from which spilled rows of trestle tables and benches already crammed with diners munching their pizzas. These were appearing in a steady stream from a bigger marquee still that, together with the bar, ran the entire length of the fourth side.

Once we had got our bearings, we worked out that we needed to order and pay for our food and drinks at the cash desks first before collecting our order from the relevant marquee.  “Una pizza diavola e una pizza verdure,…” Mr. Blue-Shirt bellowed above the Euro-pop pounding away in the background when we finally reached the front of the queue, “…una birra grande e un vino bianco”. Having handed over just €20, we received two receipts, one for our drinks order, the other for our pizza order, which crucially, as we were shortly to find, also included our order number: F180. We eased ourselves away from the crush around the tills and while Mr. Blue-Shirt joined the queue for the bar, I headed for the pizza marquee. In front of the entrance stood a long bench behind which paced a chap in shorts and a bright blue ‘crew’ T-shirt armed with microphone. “Effe cento quaranta cinque!”  he called over the crackly PA system, as he plucked a ticket from where it was tucked under the crust of the uppermost pizza in the stack that had just been deposited on the bench. Someone in the gaggle of people gathered in front of the table yelled “Si, io!” and waved their receipt at the caller who then checked the number before finally handing over the stack of pizza boxes to the hungry customer. If order number F145 had only just been served, we were in for quite a bit more pizza bingo until they got to F180, then. Fortunately, Mr. Blue-Shirt appeared beside me at that point, having wiggled his way through the crowds from the bar clutching a large plastic beaker of beer, a smaller plastic beaker of white wine and, balanced between the two, a portion of deep fried artichoke slices, so at least we would have something to keep us going until our order was called.

As we sipped and nibbled our aperitivi, we entertained ourselves by watching the incredibly slick pizza-making operation in full swing in the marquee   This was swarming with a huge team of volunteers in their bright blue ‘crew’ T-shirts and white aprons, and was furnished with a long row of trestle tables, each of which formed a different pizza-making station. “Effe cento cinquanta cinque!” blasted over the PA.  At one stood a team of people forming dough into soft plump balls, at the next, amid clouds of flour, stood the dough rolling, spinning and tossing team, and at a third a team of volunteers was ladling rich, chunky tomato sauce, fragrant with herbs and garlic, onto the wafer-thin bases. “Effe cento sessanta quattro!” Then came the topping adding team, with their battery of plastic tubs overflowing with different ingredients, and finally the mozzarella-scattering crew. “Effe cento settanta due!” Here, the finished pizzas were lined up, ready for the pizza chefs, their faces glowing red in the heat, to slide them onto long-handled paddles and feed them into the roaring maw of the one of the two huge wood burning pizza ovens that dominated the marquee. “Effe cento settanta otto!” After just three or four minutes, the bubbling, sizzling discs were slid back out of the fiery caverns and passed to the pizza boxing, slicing and stacking crew who finally dispatched each completed order to the front of the marquee. “Effe cento ottanta!” “Si, io!” I cried, waving my receipt in the approved manner.

Mr. Blue-Shirt dabbed the final smears of garlicky tomato sauce from his lips. “That was top-notch”, he shouted over the band who were now in full swing just across from the trestle table where we had managed to squidge ourselves into a couple of spare seats. With my mouth still full of the final delicious oozy, smoky forkful, I could only nod vigorously in agreement. “The sausage on mine was properly spicy”, he continued. “As good as any pizza we’ve had from a proper pizzeria.” “Absolutely!” I was able to say at last. “My vegetable topping was really generous and the crispy base was yummy”.  Replete, we swivelled on our bench to watch the band. They were clearly going down well as the dance floor was now full of couples of all ages performing the practised steps and twirls of traditional dances taught by one generation to the next.

We could still hear the band as we headed back down the hill, but as we descended into the cool night air, the rhythmic thump of the bass finally gave way to the gentle rasping of the crickets. Walking hand in hand beneath the inky sky we reflected on what – to us – had been a rather remarkable evening. And marvelled at our sheer luck in having ended up living in this incredibly active, vibrant, sociable village. A village where we are looking forward to becoming active participants in – not mere observers of – community life.