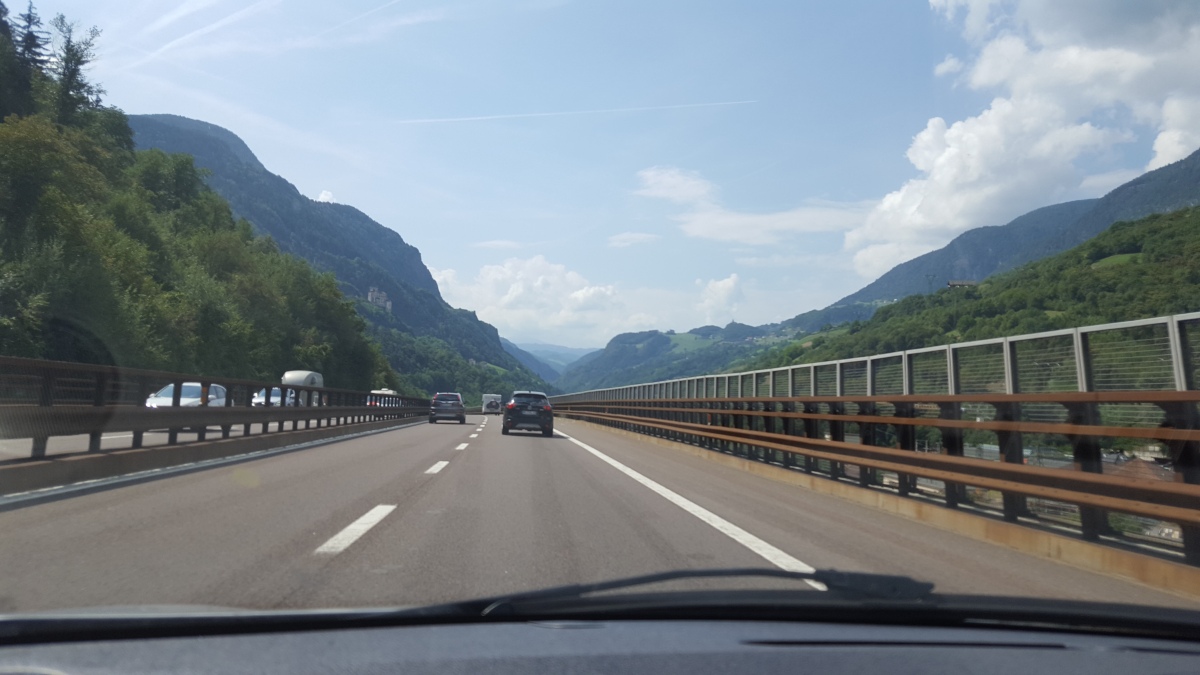 Like a drought-stricken pond, my sleep-starved brain has silted up. Clumps of words lie around its cracked and arid interior, lifeless and untidy. In the absence of anything more than a just few light showers of slumber, these clods of meaning refuse to dissolve into trains of thought that trickle into sentences that form into flowing paragraphs. After night upon night of searing pain and tormented restlessness, my mind is too thirsty for sleep to do anything more than half-heartedly kick these ugly clods about in the vain hope that sense will simply fall out of them.

In one clump are gathered random details of our trip to the UK. Three thousand miles. Eleven different beds. Five countries, four counties. Endless traffic jams. Knotted back. Two vehicles MOT-ed, one of them then sold, a new one bought. A new flat for Mr Blue-Shirt’s mum. Things dropped off. Things picked up. Van gradually filled with sundry bits and pieces for home. New car’s broken air-con sorted out. Trolley-dash round Sainsbury’s. Sight test. Hearing test. Much needed back massage.

Another contains a happy mass of catching up and touching base and all-enveloping hugs. Boys’ sailing weekend for Mr Blue-Shirt, girlie gin-fest for me. Shopping with a girlfriend: dress and hat for two autumn weddings. Excited talk of her impending move. Dinner with some friends, lunch with others. Pubs. Real ale. Enormous coffees. Flapjacks. Get-togethers with our families. All of Mr Blue-Shirt’s, with talk of new jobs, GCSE results, driving lessons, care of ageing parents. And nearly all of mine, with talk of a master’s degree in Germany, one niece’s wedding plans, another’s newly-announced pregnancy. Even flowers on the graves of those now gone: mother, father, sister – all at rest in Devon. Back pain getting ever worse.

A third is laced with nostalgia. On the way back, a night in rain-soaked Bruges where we once spent a special anniversary. Driving through the Ardennes, Mr Blue-Shirt’s teenage playground. The next night spent in Strasbourg where I studied for a year. Back pain now preventing sleep, but knowing that we’ll soon be home helps keeps my spirits up.

The next clump is more jumbled yet. Larger too. And much harder to make sense of. The mounting excitement of getting closer to home. Whooping at the first glimpse of the Adriatic Sea: it means we’re nearly there. Arriving at our big green sliding gate, delighted to be home. In front of it the decomposing body of a long-dead dead cat – thankfully not our beloved Mimi. Three pallets stacked up directly behind it.  The strangeness of these two things quickly forgotten at the fabulous sight of our beautiful newly rendered house. Relief that the irrigation system has done its job, that the wi-fi is still working. Flinging shutters open, waking up the house. The discovery of broken hinges and a crow-barred workshop door. A break-in. Disbelief. Shock. Mr Blue-Shirt’s tools all stolen.  Every single one gone. Anger, tears… Bastards. Only thankful that the house has not been touched. Carabinieri. Interviews. Theories. Another sleepless night – this time for both of us. Who? When? Why? How? Visits to the police station. A list of stolen items. Official statement made and signed. The station chief seeks to reassure us and tells us in English ‘Do not be afraid’. This simple kindness nearly makes me cry. Back pain now almost unbearable. Arm and fingers growing numb. Thankful that we’re now registered with a doctor. The first chance to wield my hard-won health card. I opt for tablets rather than injections as Mr Blue-Shirt would need to administer them. Insurance policy. Are we covered? How do we claim? Meeting with our agent booked. Nights spent in the spare room. Impossible to lie down. Impossible to sit up. Impossible to escape the pain. The BBC World Service for company, but not really listened to. Why us? Is it personal? Who knew we’d be away? Someone must have tipped thee thieves off. Bastards. The tablets aren’t working.  Mr Blue-Shirt watches YouTube videos on how to give injections. The lovely friends who have come to stay urge me to see a chiropractor. I relent and find one, and weep with relief when she says she can fit me in that day. Head crunched, spine pummelled. C6-C7 radiculopathy. Misaligned vertebrae. Trapped nerve. No silver bullet. Further sessions booked. The pain and the sleeplessness persist. Tearful. Miserable. Exhausted. So thankful for Mr Blue-Shirt’s kindness and support. So disappointed at my current inability to reciprocate.

A final clump. La Dolce Vita has taken on a bitter taste. It will pass though. We shall make it pass. We shall do as the sunflowers do: we shall turn our faces to the sun so the shadows fall behind us.

One thought on “Homecoming”