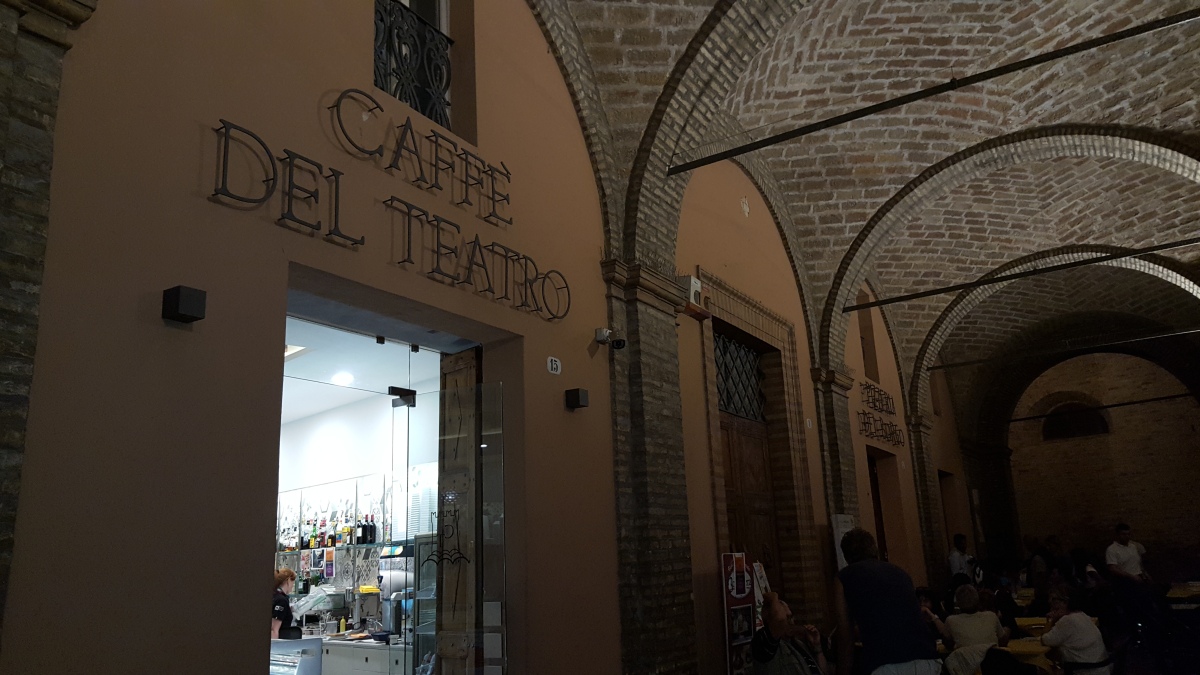 “Ecco ci qua!” Cecilia smiled broadly as she placed our customary cappuccino and americano combo down in front of us with a flourish. “Here we are!” It was mid-morning so we had chosen one of the small white tables in the deep shade of the Caffé del Teatro’s colonnaded terrace that looks onto the main square in the village. The sunny terrace to the side of the café, with its boxy modern armchairs and its fabulous views across to the Sibillini Mountains provides the perfect spot to enjoy aperitivi, but was already way too hot at this time of day. With her tray thrust under her arm, Cecilia bustled off to fetch the obligatory pot of sugar sachets and canister of paper napkins. “Senti,” I said when she returned. “Sapevi che… Listen, did you know that there were thieves operating in the area?”

We had found out only some weeks earlier that Cecilia, along with her husband Fabio and young son Nicolò, are some of our nearest neighbours. They live in one of the small collection of houses on the hill up the lane immediately behind our house, and I could practically wave to her from my study window as she drives past on her way to work. We didn’t really believe that any of our neighbours would have been broken into as well as us since our break-in had so clearly been a put-up job. While we were reluctant to point an accusing finger at any particular individual, it was simply too much of a coincidence that the theft of all Mr Blue-Shirt’s tools had occurred not only while we were away, but also immediately after we had had an assortment of workmen about the place (re-doing all the external render), many of whom had been into the tool store to plug something in or to run some water to mix another bucket of goo. The Carabinieri didn’t think it was a coincidence, our insurance agent didn’t think it was a coincidence. And nor, he finally acknowledged, did the owner of the building company that had done the work.  We still thought it worth putting the word out, though, in case someone had seen or heard something, or had been offered some cheap second-hand tools.

“No…,” Cecilia said, puzzled. “Why?” As I recounted what had happened her expression turned to one of incredulity. “No! I’m so sorry! How terrible for you! Did they get in the house too?” I assured her that they hadn’t – the one saving grace in the whole situation. “That’s something, at least.” She took her tray from under her arm and leant it on the table. “But all your husband’s tools! Fabio is a plumber and he keeps all his tools in his van. If that was ever broken into… Well, I don’t know what we’d do…” She sighed, picked up her tray again and squeezed my shoulder before bustling back inside to serve the row of customers waiting at the counter.

“Mi dispiace molto!” Massimo, the tall, whip-thin and unfailingly charming owner of the café had broken off his conversation with one of the old boys who are a regular fixture in the place as soon as he saw us come in to pay for our coffees. “I’m so sorry. Cecilia’s just told me you’ve been broken into. What happened?” This time it was Mr. Blue-Shirt’s turn to go through the story. A couple of the old boys and a black-clad nonna, who had just tossed back a caffé corretto (an espresso with a shot of grappa), tuned in to what Mr. Blue-Shirt was saying, expressions of keen interest spreading across their faces. “Listen,” said Massimo as he dropped our €2,20 into the till. “If there is anything I can do, anything you need, just say…” The nonna and the old boys nodded. We all knew, of course, that there nothing that anyone could do, but we were touched by his concern and sincerity. “Thank you. That’s kind of you. I’ll do that,” said Mr. Blue-Shirt with a weary smile. “Arrivederci.” We turned to leave. “Arrivederci,” replied the three elderly eavesdroppers, looking us firmly in the eye.

We now had little doubt that the news of the English couple’s break-in (“you know: the ones who live in the place with the green gate, just down from Giovanni and Violetta…”) would be half way round the village by the time we got home. We have been going to the café on a regular basis ever since we have been here, partly because it is a lovely place to go for a coffee or an Aperol spritz, but also because it became apparent almost the first time we went there that it is effectively the beating heart of the village. Seemingly open for about sixteen hours a day, there is never a time when it is not buzzing with life and chatter, the local news and gossip being mixed into each successive conversation like sugar stirred into coffee. First thing in the morning the cheerfully lit, long narrow space is filled with people dashing in to knock back a quick espresso on their way to work. Then it’s tired-looking young mothers with their pre-school children in buggies coming in for a bit of grown-up conversation and a change of scene. Come lunch time they give way to a succession of dusty workmen, who, perched on bar stools, skim the Gazzetta dello Sport as they bolt down their piadini. And after this the rolling cast of old boys, who often don’t even have anything to eat or drink but just sit in a circle setting the world to rights, pretty much have the place to themselves until school-out time. Then waves of boisterous youngsters spend ages peering into the glass cabinets deciding which type of cake or which flavour ice cream to have. As evening approaches, bowls of olives and nuts, cubes of cheese and chunks of sausage appear on the bar ready for the aperitivi crowd: small groups of colleagues enjoying a glass of wine on their way home from work, or couples on their way out for the evening. Gradually the place takes on more the feel of a bar than a café: the volume drops, the pace slows and the coffee machine falls quiet. But still the conversation and gossip flow, the day’s news still wafting in and out with every swing of the tall glass doors. “Any idea why the autostrada was closed earlier?”… “Mariella’s had her baby.”… “Did you hear about the break-in at the English couple’s house?”…

2 thoughts on “Spreading the Word”