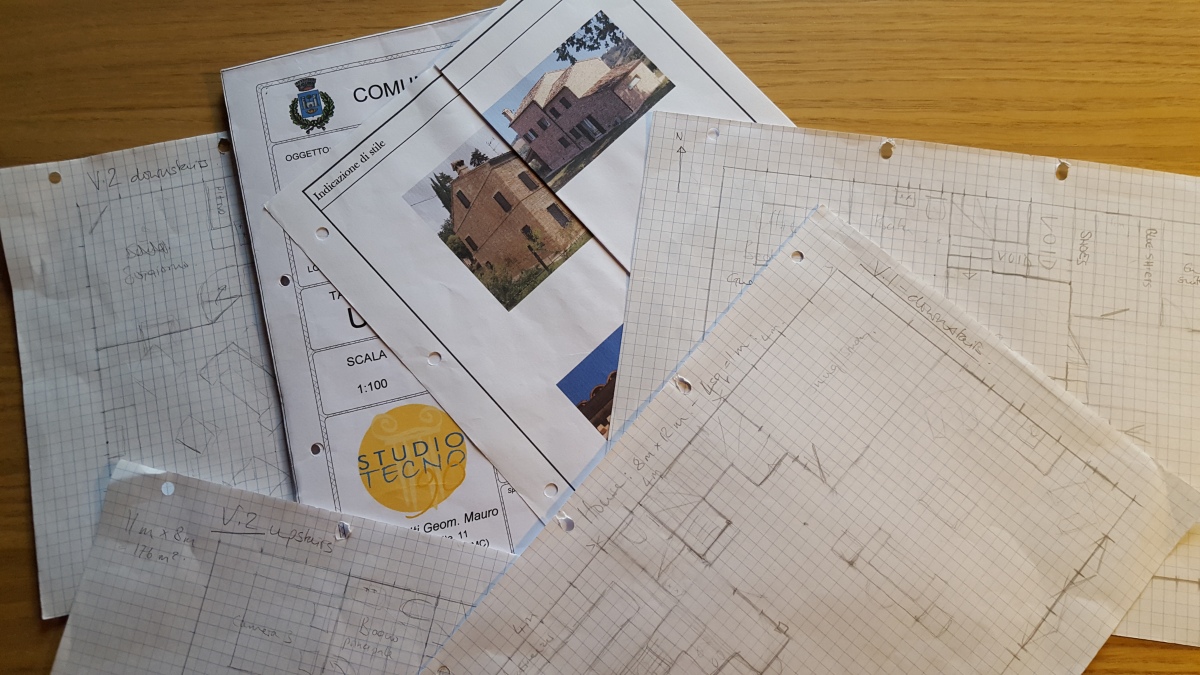 We stared with incredulity at the sum scrawled in Mauro’s flamboyant hand across the corner of the drawing that covered his glass-topped desk. Mr Blue-Shirt tapped out sums on his calculator while I tried to follow Mauro’s rapid-fire explanation of the figures he had just presented us with. It felt as if we had just been shoved off a cliff and were now free-falling into an abyss. As the sheer cliff-face streaked up past us and the sky shrank to a narrow blue slot, our brains struggled to process the implications of what we had just heard. A couple of seconds later we hit the ground with the unyielding thud of realisation.  It was no longer viable to build a house on our plot of land.

We were sitting in the small but trendily minimal office of the architect we had been about to instruct to oversee the building of the house we had been planning for the five years since we had bought a quartet of crumbling ruins and a few dozen straggly olive trees on a plot of land tucked in an achingly beautiful corner of Le Marche’s interior. It was where our brief but intense search had concluded soon after we had decided that this was definitely where we wanted to make our home.  We had formally viewed very few places – although we had informally clambered and scrabbled over dozens of similar wrecks ‘in need of complete restoration’ that we had come across on our travels in the area – but we knew almost instantly: this was The One. We were absolutely sure of it. It filled every one of our ‘hard’ criteria in terms of proximity to various amenities, but just as importantly, it also offered the tantalising promise of our vision of La Dolce Vita. It had plenty of olive trees, and the buildings – such as they were – offered the potential to achieve our aim of creating two income streams, a holiday cottage and a forge, and in whichever direction we looked, receding folds of softly curving hills covered with a mosaic of greens and golds faded into infinity.  And because this magical spot tugged so irresistibly at our hearts, the fact that all four ruins on the plot were well beyond any kind of salvation was neither here nor there: we would simply re-build rather than restore. Until that point we had never even entertained the notion of building, but suddenly it seemed the most natural thing in the world.  Then, without the constraints of awkward spaces, odd layouts or antiquated services to work round, our imaginations ran free. Within minutes we could picture ourselves living there. And not just where we would place this, that or the other piece of furniture and how it would all look, but how we would actually lead our lives. All our comings and goings, our favourite spots, and the locations for the myriad activities that would form the warp and weft of our daily lives. We had mentally and emotionally moved in before we had even finished the viewing.

While we were still running the forge, we planned and sketched as if possessed and soon knew under exactly which olive tree we would sip our aperitivi on a summer’s evening, what the fireplace would look like that we would curl up in front of as the nights drew in, how the generous kitchen would be filled with the laughter of the constant stream of friends who would gather for boozy suppers around the big battered dining table. But now it was never going to happen. The cicadas in the olive trees had suddenly fallen silent, the hearth grown cold, and the laughter was now just an echo in our empty dreams. The simple fact of the matter was that we could no longer afford to build. Since we had owned the plot building costs had risen sharply, with construction companies for some reason choosing to compete in a post-crisis market by increasing their prices. At the same time, the price of finished properties had fallen as a result of the financial crash, and in an attempt to release cash, many owners had put their properties on the market, thereby creating an over-supply. It was a perfect storm. Even if we could have afforded to build the house we had planned down to the last detail, it would have cost far more than buying an equivalent finished property. And if we tried reduced costs by building something more modest than we had already envisaged (which by any measure was hardly extravagant), we still could have bought its ready-built equivalent more cheaply. No matter which way we looked at it, no matter how many sums we did or options we considered, building just made no sense. Our dream was dead.

The sense of loss was enormous, and the heartbreak left us paralysed for months, during which we just buried ourselves in our business. It gradually dawned on us, however, that we were not prepared to give up on our dream; we just needed to develop a Plan B. But before we could do that, we had to dismantle Plan A, a plan that had been our driving force for nearly five years. It was a slow and painful process, though, as we had to un-draw all the drawings, un-hope all the hopes and un-dream all the dreams. We needed time to grieve for a life we could never have. However, little by little Plan B did emerge from the dense fog of disappointment. First, since the economics had told us to buy not build, we decided that was what we would do. Then, in order to avoid leaping from the fire of building into the frying pan of restoration, we also decided we would buy somewhere fully restored. Finally, we concluded that we still wanted to live in the same area, whose towns and villages we were already familiar with, where we had already made some friends, and which we had already started to think of as home. We had our Plan B.  And so almost a year after that meeting with Mauro, the new search was on.