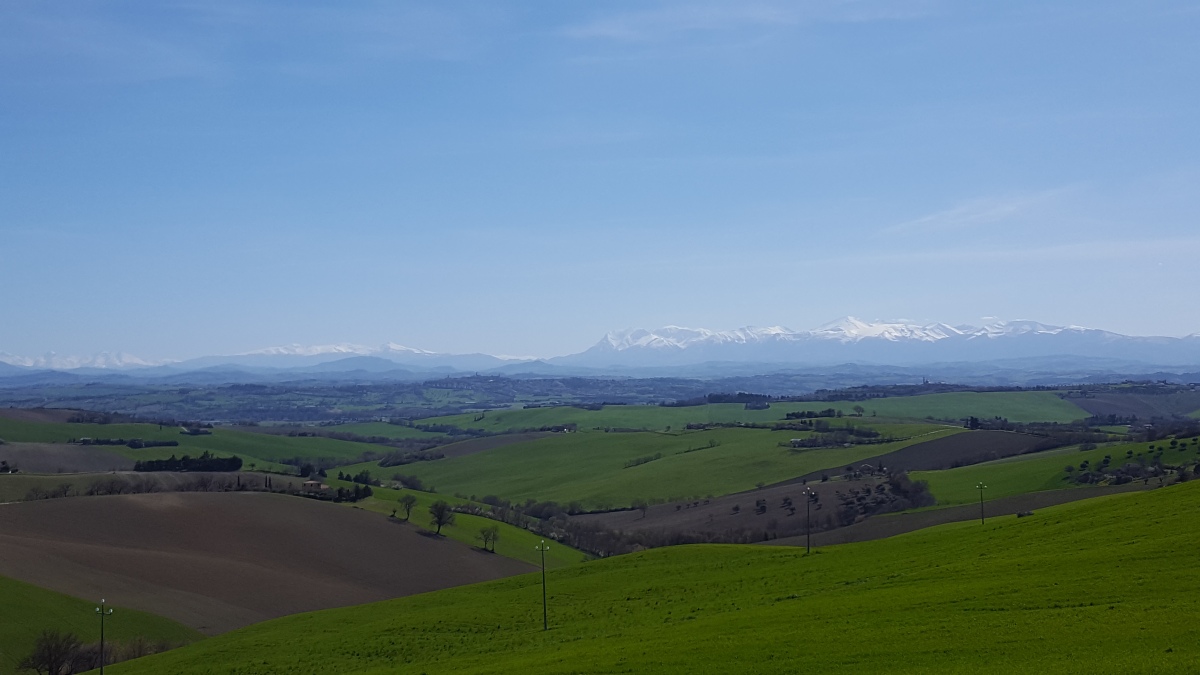 We’ve come to know it as Wimbledon Road. It stretches for a kilometre or so along a ridge that forms the start to any trip from our place down towards the coast or the dual carriageway that heads inland, or even to the supermarket. When travelling along it, it is all but impossible not to keep looking from left to right and back again as if watching a tennis match. It is the only way to drink in the heart-stopping views to both sides of the road before it swings away into dense trees and then begins the descent to the coast. To the left, framed by the honey-coloured hilltop villages of Montelupone and Potenza Picena, the broad, the olive- and vine-striped valley sweeps down to the enticing triangle of turquoise sea below – a wide-angle version of the view from our sitting room windows. While to the right, a patchwork of tree-edged fields, which by turns yield wheat or sunflowers or stand fallow, extends across to the mighty Sibillini Mountains.

About 40 miles away, they have been a fully-fledged National Park since 1993, offering hikers and cyclists miles of trails and dozens of rifugi providing comfy beds and hearty local food at the end of a day spent exploring the park’s flora and fauna, waterfalls and gorges, abbeys and monasteries. The mountains’ craggy timelessness forms our western horizon, a collection of some twenty peaks that rise to almost three thousand metres and whose upper slopes remain clad in snow until well into spring, when its upland meadows are carpeted with cornflowers, buttercups and poppies.

There are no two days when they look the same, though. On occasions, they take on a ghostly aspect in the early morning haze when the only hint of their presence is the sun reflecting off their icy flanks. From time to time they disappear altogether, retreating into a pale shroud of mist, and sometimes their bare, forbidding slopes are hidden behind a swirling cloak of steel grey cloud – as sure a sign of a change in the weather as any barometer.

Mysterious and moody, and home to wolves and wild cats, falcons and eagles, they have for centuries been associated with magic and the occult thanks to the legend of Sibyl. It is claimed that this mystic prophetess and witch was enraged to find that not she but Mary would be mother of God. Her rage provoked God to order her to dwell with devils until Judgement Day in a cave beneath one of the range’s highest peaks, which naturally came to be known as Mount Sibyl (Monte Sibilla). Indeed, the whole range became known as a ‘realm of demons, necromancers and fairies’, as the Italian Tourist Board puts it.  And when storms brew, it is not difficult to understand why dark forces were believed to reign there. The rumbling thunder and churning cloud could easily be Sibyl and her demons showing their displeasure as they hurl spears of lightning and sheets of angry rain onto the verdant lowland pastures.

Then, when the storm has passed, its anger spent, the Sibillini’s jagged peaks appear like islands suspended above the shawl of mist draped around their rugged shoulders. Mostly, though, they stand in all their splendour against a crystalline sky, serene yet stark. Flushed with rosy-pink at dawn, then clothed in a palette of greys and greens as the sun climbs higher. And as the sun drops behind them, they fade to heather-purple and finally to near-black silhouettes as the dying embers of the day cast flares of crimson and scarlet across an orange sky.

It is a menacing beauty, however. For it is a matter of neither myth nor legend that deep below their forbidding slopes seismic forces periodically shift and stir. Directly beneath the range’s highest peak runs the infamous Monte Vettore fault, and when it last ruptured in 2016, it unleashed an earthquake that devastated communities throughout the mountains and affected towns across the region. The Marchigiani are a stoical and optimistic people, though, and life in and around the mountains has returned to near-normal remarkably quickly. Despite the lurking menace, it is as if there is also comfort to be found in the mountains’ timelessness and constancy, an abiding sense that in the end ‘all shall be well’. And it is certainly something that we are aware of; that whatever triumphs or disasters the day brings, those soaring, ever-yet-never-changing peaks will always be there somewhere as we cast our eyes right on Wimbledon Road.