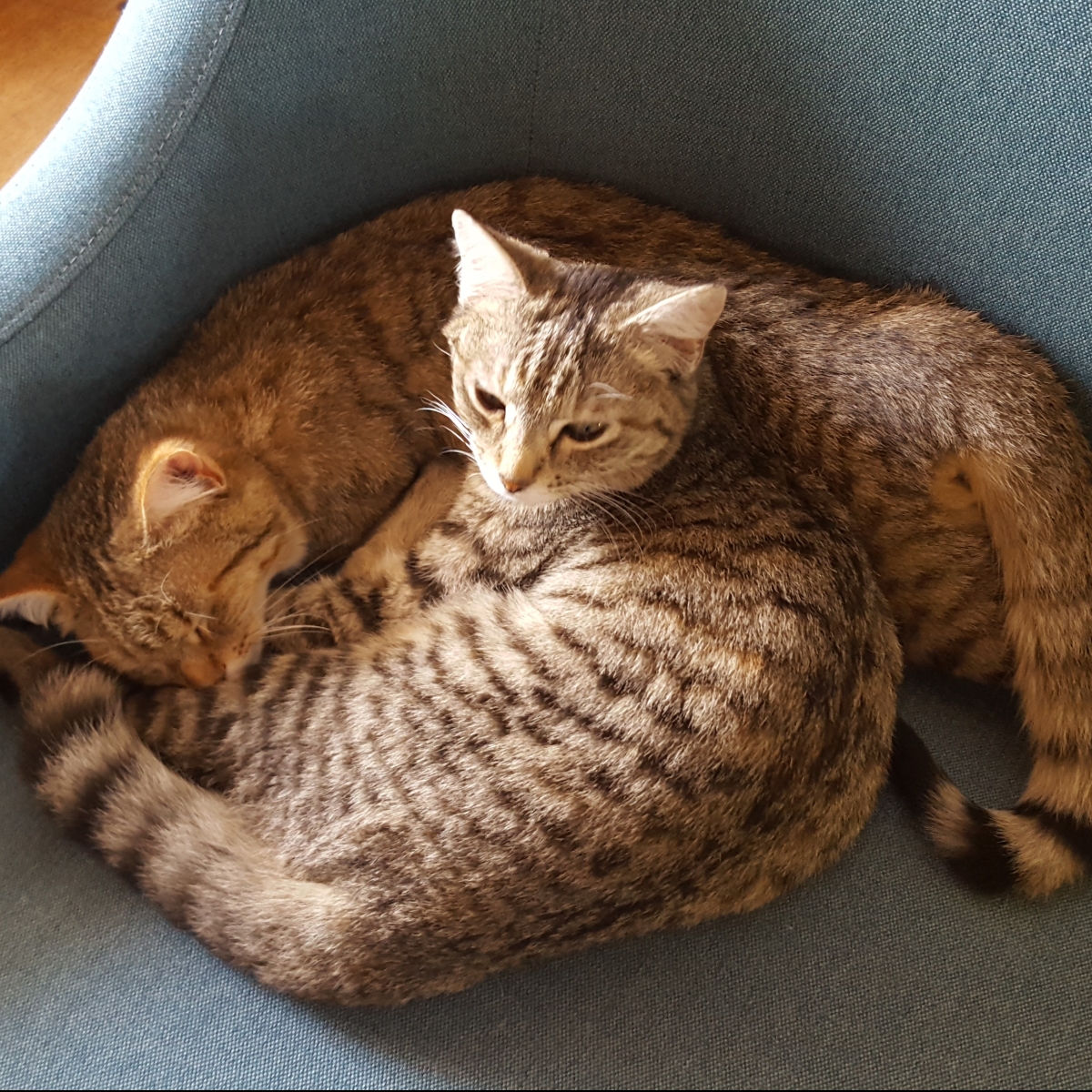 It’s the word Emanuela used to describe Stanley and Matilda when we picked them up from at the end of their first stay with her while we were away for a few days: “Sono diavoli, i gattini!” Slightly alarmed, I looked up from trying to wrestle them into their respective travel boxes. Oh God! Had they broken one of Emanuela’s many ornaments? Scratched one of her grandchildren? Eaten one of the several dozen chicks she was hand-rearing? They had been in a cardboard box in the over-furnished but spotless living room where she let her ‘guests’ run about from time to time. But her ruddy, high cheek-boned face had creased into a broad grin, her deep-set blue eyes were sparkling with amusement, and laughter had set her enormous shelf-like bosom aquiver. “Well, we did warn you they were lively!” I countered, mightily relieved to find that our two young tabby cats had not let us down after all.

Stanley and Matilda (aka Tilly) are brother and sister, and by turns partners in crime, bed-fellows, sworn enemies, play-mates, sparring partners – and completely inseparable. They came into our lives at the end of January when we decided that the pain of losing Mimi the previous October had subsided enough for us to countenance ending our state of unintended catlessness. We got them from a blacksmithing acquaintance over in Treia who permanently suffers from a surfeit of kittens and had offered us the pair of our choice – we were quite clear that we wanted two – from his latest brood. Brought up from birth among a furry tangle of cousins, siblings, parents, aunts and uncles, even at four months old, they were savvy, feisty, hardy, bold and perfectly prepared to fight off every member of their extended feline family for any scrap of food on offer. In short, a handful. But when they first arrived, they were transformed into a pair of textbook scaredy-cats: bewildered and jittery, they spent the first few days with us in a perpetual state of wide-eyed terror. Mistrustful and cautious of all the unfamiliarity and newness, they remained cuddled up together on one of the dining chairs, only occasionally hopping down for a quick turkey biscuit or two before returning to their refuge, still reluctant to explore their new surroundings. Gradually, though, they would  gingerly accept the odd scritch and on occasions even found the purr button, but still remained to be convinced that all would be well here in their new home at Casa Girasole.

In the end, however, it took only a few weeks for their confidence – along with their feistiness, playfulness and greediness – to return, and for them to make themselves at home. It didn’t take them long, either, to get used to indoor living: they soon got the hang of tea-cosying up on an armchair in front of the wood burner in the snug, or curling up together on the sofa, entwined in a tabby puzzle of legs, tails, ears and paws – a kind of furry ‘octo-puss’. But as they had been entirely outdoor cats up to this point, it also meant that no surface, object or foodstuff was off limits: placid lap cats they were not. And we swiftly had to re-locate ornaments and breakables from shelves to cupboards, and soon learnt – the hard way – never to leave anything edible even remotely accessible to their raspy tongues and needle-sharp teeth. One morning early on, I left my packed lunch on the kitchen worksurface only for as long as it took to nip to the loo and run upstairs for my laptop bag before heading off for a day’s teaching, but came back down to find my cheese and onion relish sandwich on the floor, a hole gnawed through the two layers of the plastic bag it had been wrapped in, a row of neat, crescent-shaped bites chomped from the crust, and all the cheese (and onion relish) missing – along with any sign of the guilty parties.

Little by little, though, they have abandoned their semi-feral ways and are now really quite well-mannered. That is not to say, mind you, that they are not boisterous, mischievous and sometimes a downright nuisance – especially at 5.30am when they start the day by thundering up and down the stairs in a game of high-speed tag, or conducting a no-holds-barred kick-boxing match on, under and over our bed. But claws are now cleaned on doormats rather than curtains, the worksurface and dining table are now largely free of paw prints and meals (of cat- not human-food) are eaten on the floor from bowls. The penny has dropped that they are on to a pretty good thing with us and that life is no longer a permanent exercise in survival of the fittest. Over time they have relaxed and lowered their guard: rather than shying from our touch they are now trusting and affectionate, and actively seek out our company, ever ready to have their tummies tickled, paws outstretched, legs akimbo and purring like a pair of clockwork toys.

And in the days following the break-in, when shock and anger have hung heavy in the air, they have been a truly healing presence: somehow picking up on our pain and sorrow they have offered reassurance, company, comfort and affection worthy of the dearest of human friends. So while they may not quite be angels, they are very far from devils – and we would not be without them.