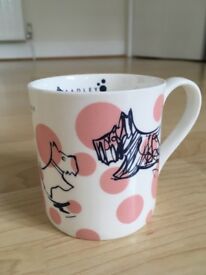 I heard the crash from our bedroom where I had been wrestling the duvet into its cover: the unmistakable sound of china smashing onto the kitchen floor tiles. “What was that?” I called anxiously, and galloped downstairs to make sure Mr Blue-Shirt hadn’t hurt himself. “It was a mug,” came his slightly muffled answer from inside the pantry where he was already gingerly picking up the fragments of shattered pottery. “Which one?” I asked. Like most people, I suspect, we have gathered a large, rag-tag collection mugs over time, nearly all of them with memories attached. There are the Glühwein mugs from the Christmas market in Osnabrück where we spent much of the ‘90s, a couple to mark the South East Asian Games from our three years in Brunei, one (there had been two) bought from the gift shop at the foot of the Sydney Harbour Bridge, a couple (one chipped, one cracked) from a tea plantation in the Cameron Highlands of Malaysia, a series from successive Chelsea Flower Shows where our ironwork had regularly featured in a particular designer’s medal-winning show gardens, and a clutch of random, anonymous supermarket mugs for use when the dishwasher is full. I just hoped it was one of those.

Mr Blue-Shirt winced. “Your Radley mug.” And sure enough, I could make out sections of its trademark ‘Westie’ motifs on the jagged chunks strewn across the pantry floor. “Oh, no! It was one of my favourites!” Mr Blue-Shirt sighed. “I know, I know. I’m so sorry. It just slipped out of my hand.” It had been a jokey present from Mr Blue-Shirt a few Christmases ago (a gentle dig at my well-established Radley handbag habit) when by chance my jokey gift to him had also been a mug, one featuring a cat just like Mimi, and since when we had  always considered them a pair: a silly, everyday symbol of life lived on the same wavelength. Now, like so much else we had treasured, it was gone. And the floodgates opened. Great gulping sobs caught in my throat and hot tears coursed down my cheeks. I buried my face in Mr Blue-Shirt’s chest and he stroked my back, soothing my sobs into sniffles. “I know I’m over-reacting,” I mumbled into his damp shirtfront. “It’s just a mug, for God’s sake.” I was trying to be reasonable. “But it was that mug. You gave it to me.” A fresh wave of tears spilled down my face. “It was special. I used it all the time.” Another blow. Another loss. Another cherished memory gone.

It was as if the jagged shards of pottery had pierced the gauze-thin carapace of normality and healing and exposed the stinging rawness that remained just beneath the surface. Still very much there were the grief and pain from the burglary; the sense of loss still undiminished, for what has been taken from us is more – so much more – than mere possessions. Each item had a meaning, each one had a story, and together they traced the course of our two tightly interwoven lifetimes; the priceless (to us) tokens of togetherness, of shared adventures, achievements, landmarks, and celebrations. But also a record for those who might care to remember us when we are gone of what and where and who we once were. A few mementos for family posterity to go with those left by parents and grandparents already gone, and of which I felt we were mere custodians: my father’s World War II medals (along with Mr Blue-Shirt’s own service medals) my great-grandmother’s silver pocket watch, my mother’s assortment of modest trinkets, lovingly collected with ‘legacy’ very much in mind. All now replaced with guilt and self-recrimination, sharply magnified through the powerful lens of hindsight. Should have done… Could have done… Wish we had… Why didn’t we…? A lens through which I can see only failure; a sense that I have let our nieces and nephews down by breaking a precious connection with their forebears. Our new great-nephew will now never experience the weight of those wartime medals in his small hands, and through them learn of his great-grandfather’s valour. He will now never pop open the back of that silver pocket watch, which as a child I used to do, and read, engraved in copperplate, the name of his great-great-great-grandmother, which for me gave ‘Phoebe Mitchell’ both form and meaning. And my poor mother would be inconsolable.

Still there too were the fears and doubts whose seeds had been sown the instant I had seen the twisted, gaping safe, and which, like bindweed, had now taken hold, its insistent, probing tendrils strangling our hopes and dreams, crushing our confidence and certainties. Would they come back? Were they still watching? Who could we trust? And worse still, had we got it all terribly wrong? Had this whole Italian adventure been a ghastly mistake? Was this the punishment for our foolishness? Or for some other gross misdeed of which we still remain entirely ignorant? What have we done? When? Where? And why did we need to be punished like this? Above all, why?? In God’s name, WHY??

For weeks the nightly presence of these shapeshifting monsters has denied me the blissful release of sleep, even though my daytime self keeps telling my nighttime self she is being irrational and foolish: you’ve done nothing wrong, it’s not your fault, she reasons, you were just unlucky. My nighttime self, though, just shakes her head and waves her trump card: ‘yes, but that is how it FEELS,’ she shrieks, and my daytime self for now can only shrug.  Yet as I turn from side to side and back again, trying to escape my nightly monsters, every now and then I think I catch a tantalising glimpse of something bright and good and whole. It’s as tiny and elusive and ephemeral as the evening fireflies that dance among the olive trees at this time of year, and as difficult to catch hold of. But it just might be something; it might even be a start. Please let it be a start.