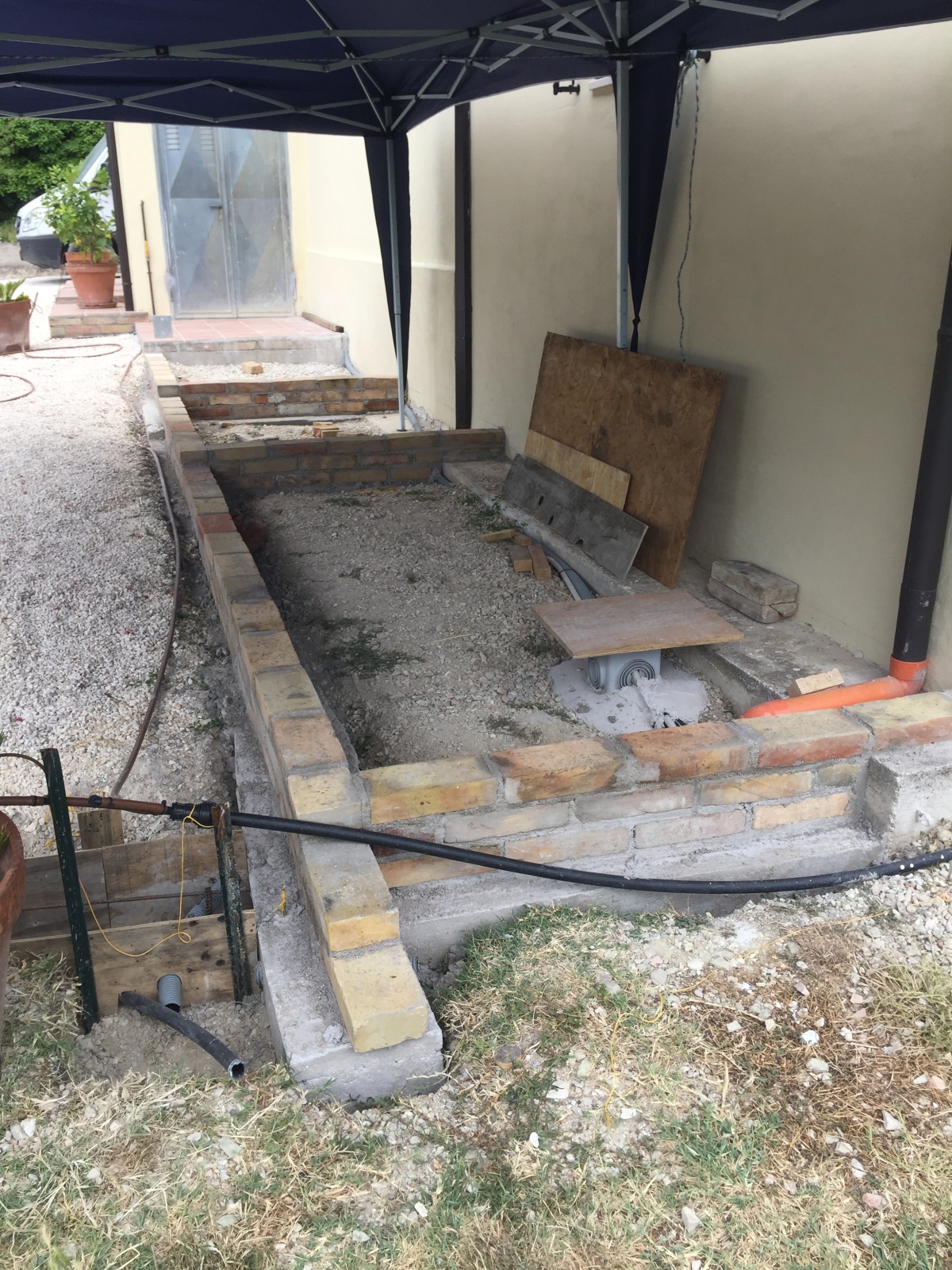 There has been no stopping Mr Blue-Shirt. Since he finally cracked the ‘fai da te’ puzzle, he has been putting together an ever-expanding web of equipment hire places, local suppliers and tool shops, and so there is now almost no job that will defeat him for want of the right materials or the right gadget. And this network has already enabled him to make great strides with building the terrace that is beginning to wind its way around the house.

He completed the preliminary phase in early spring, re-building the deep front step and linking this to the narrow section of terrace that now runs along the front of the outside stairs to the doors to the boiler room. And having finally managed to hire a digger, he made sure he got as much done as humanly possible while he had it. The ensuing dig-athon resulted in the creation of the trench for the foundations of the section of terrace along the front of the house from the boiler room doors to the south-eastern corner, for the large square section on the northern-eastern side, and for the long, low curving wall that will frame the recently gravelled driveway.

Then came what, at a stretch, just about counts as Mr Blue-Shirt’s first metal work since we’ve been here: knitting together with twists of heavy wire the sections of reinforcing bar that form cages for lining the trenches, ready for the concrete to be poured on top.  Before that happened, though, he had to finish off the pipework, making sure that all the tubing for the irrigation system that runs right around the house from the well in the north-western corner was hidden in the trench too, and that all the downpipes from the gutters were also buried and connected to the land drain or to the waste water processing system rather than spewing their contents across the drive or over the lawn. Oh, and also feed through the cages long stretches of cabling for outdoor lights and the automated gates (forged by Mr Blue-Shirt, of course) that will eventually be the crowning glory of what has turned out to be a surprisingly complex groundwork project.

Only once all the pipes and cables had been safely wiggled through the long, thin cages, and a collection of access points installed, could he start on filling the trench with concrete. Fortunately, we had had the foresight to buy a battered but functional cement mixer from our predecessors, which made the task slightly less exhausting, but poor Mr Blue-Shirt still had to wheelbarrow countless ninety-litre loads across the drive and round the house and heave them into the next section of trench to be filled. And the savage heat and blazing sun meant he had to work fast so that the cement didn’t start to set and become unworkable before it even got as far as the trench. Then again, this also meant that he didn’t have to wait very long before the concrete was firm enough for him to start laying bricks on top: the edging for the sections of terrace.

Mr Blue-Shirt loves bricklaying. He would be the first to acknowledge that he is not the fastest bricky in the trade, but for him the pleasure lies not in speed, but in achieving kink-free lines and exact right-angles. And just as with every job he tackles, preparation is paramount, so long before he set the trusty old cement mixer in motion, he spent hours precisely positioning, checking and re-positioning lengths of yellow nylon string to ensure a perfectly straight edge, and meticulously measuring, checking and then drawing pencil lines at the base of the house to ensure a perfectly horizontal finish. Only once he was satisfied he had got everything just so did he take up his trowel and turn to the stack of bricks he had wheeled round from the ruins of the now half-demolished pigsty. However keen we are to rid ourselves of this detested hulk and source of our recent misfortune, we concluded some time ago that an essential part of our healing would be to salvage from the wreckage as many of the bricks as possible so they could be reincarnated into something new and whole and good. It was almost with a degree of ceremony, therefore, that he loaded his trowel with a dollop of freshly mixed cement, took the first brick from the pile, spread it with the viscous grey goo, and carefully set it in place, tapping it level with the handle of his trowel.

Over the next few days, Mr Blue-Shirt laboured away on his hands and knees, protected from the merciless sun first by our bright blue beach umbrella and when that proved insufficient, in the shade of the collapsible navy-blue gazebo which used to provide shelter from wind and rain when we conducted outdoor forging workshops. Brick by brick the skeleton of the terraces rose from the concrete foundations. Neat slices of pinkish-beige laid in arrow-straight rows alternated with stripes of icing-smooth, pale grey cement: who knew that a simple brick wall could be such a thing of beauty? And in my mind’s eye, I started to flesh out those bones and saw the pots of cheery geraniums and tubs of stately agapanthus, the cast iron café table and chairs, the two tabby cats dozing on the warm terracotta tiles… I smiled and reached for Mr Blue-Shirt’s rough, cement-parched hand as we stood admiring his handiwork. This wasn’t just a wall; this was a step towards slaying our demons, this was healing. This wasn’t just about re-claiming bricks; this was about re-claiming our hopes and dreams.

There was a long way to go, however, before we could sit at that table, sipping cool drinks and idly scritching a cat. So Mr Blue-Shirt pulled his dusty work gloves back on and slung his pick-axe and shovel into the wheelbarrow. “Right,” he said purposefully. “Rubble…”