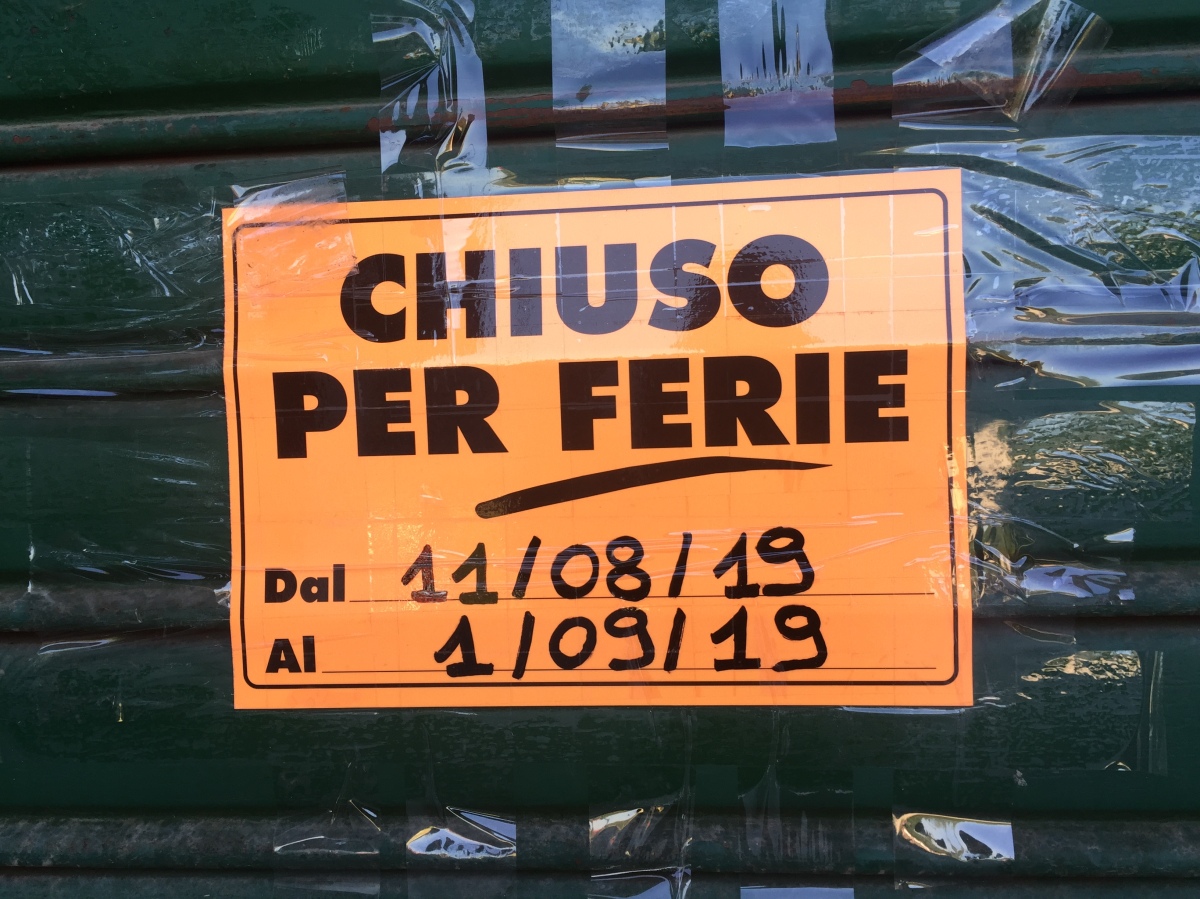 Gates locked, blinds drawn and attached to the tightly closed shutters an A4-sized piece of fluorescent orange card on which are printed in heavy black capitals the words ‘chiuso per ferie’ – closed for holidays: it is one of August’s most common sights in town centres, shopping malls and trading estates throughout Italy.

Along with much of southern Europe, August is the holiday month, and while closing for the whole of August is no longer realistic in a global economy, very many companies will still shut down completely for a couple of weeks, and even the smallest of businesses will take a week or so off. However long the break, though, it will almost certainly include 15th August: the national public holiday known as Ferragosto that marks the height of summer.

In common with many traditions in Italy, the origins of this festival are Roman. The name is a corruption of ‘feriae augusti’, which translates as ‘the holidays of Augustus’, the Emperor who in the 18th century BC designated August as period of rest to allow people to recover from the strenuous labour of bringing in the harvest over the preceding weeks. During this period, working animals were also relieved of their loads and horse races were held as part of the celebrations.  Indeed, this is the origin of the world-famous palio that is still held every year in Siena on 16th August in much the same form as in Roman times.

The month was already punctuated with festivals such as the three-day Nemoralia dedicated to Diana the Huntress, the Consualia to honour Consus, the god of the harvest, and the Vinalia Rustica to celebrate fertility and the forthcoming grape harvest. By unifying all these pre-existing jollities into one continuous holiday period, the Emperor’s gesture of largesse was consequently tempered with an element of practicality, not to mention a dash of politics by currying favour with the masses, who on wishing their masters ‘buon ferragosto’ would receive a small gift of money or food with which to enjoy the holidays. This tradition became so entrenched that during the Renaissance, the Papal States (of which Le Marche then formed part) made it obligatory.

Along with many other festivals of Roman origin, the Catholic Church soon muscled in on things and sought to Christianise these pagan festivities as early as the 5th century AD when it established The Feast of the Assumption of the Virgin Mary which falls – somewhat conveniently – on 15th August, bang in the middle of the feriae augusti. This marks the day on which the Virgin is believed to have ascended to Heaven at the end of her life on earth and is technically the reason why the day is a public holiday in Italy. In many towns and villages, a statue of the Virgin Mary carried aloft through the streets before being returned to the parish church for a service of benediction.

In the first part of the twentieth century, the festival took on a more political flavour when Mussolini’s fascist regime began organising discounted trips for workers through its Opera Nazionale Dopolavoro (National Recreational Club), which was conceived as a means of competing with the Socialists in relation to workers’ welfare. The initiative, known as ‘the People’s Trains of Ferragosto’, ran from 1931 to 1939 and gave the working classes the opportunity to take a one-day or a three-day trip to visit the seaside, the mountains or cultural sites – which is why present-day tourists are still able to visit museums, monuments and galleries on 15th August even though many other amenities will be shut. As it was aimed chiefly at city dwellers and workers, it turned Ferragosto from an almost exclusively agricultural and rural affair into a festival for all the labouring classes and as such was effectively a fore-runner of modern mass tourism.

While holidaymakers have long since abandoned the train in favour of the car, some tour operators apparently still offer discounts on Ferragosto packages. And another feature of the fascist era Ferragosto has also lingered: the picnic. As the People’s Train trips did not include meals, travellers had to bring their own food with them and this tradition has stuck. A protracted lunch all’aperto (in the open) with family and friends, preferably somewhere that offers some respite from the mid-summer heat, still forms an integral part of celebrations. These are often rounded off with bonfires and public firework displays, which are actually another remnant of the ancient festivities.

And us? Well, I suppose we followed tradition, albeit more by accident than design. Although there were no horse races or fireworks, we went away briefly, we visited some cultural sights and we dined all’aperto – admittedly on the terrace of a restaurant rather than by a lake. For Ferragosto happened to coincide with our micro-holiday in Spello that featured in last week’s post. We can only hope that its timing coupled with our observance of pagan, sacred and secular customs are a good omen for us…