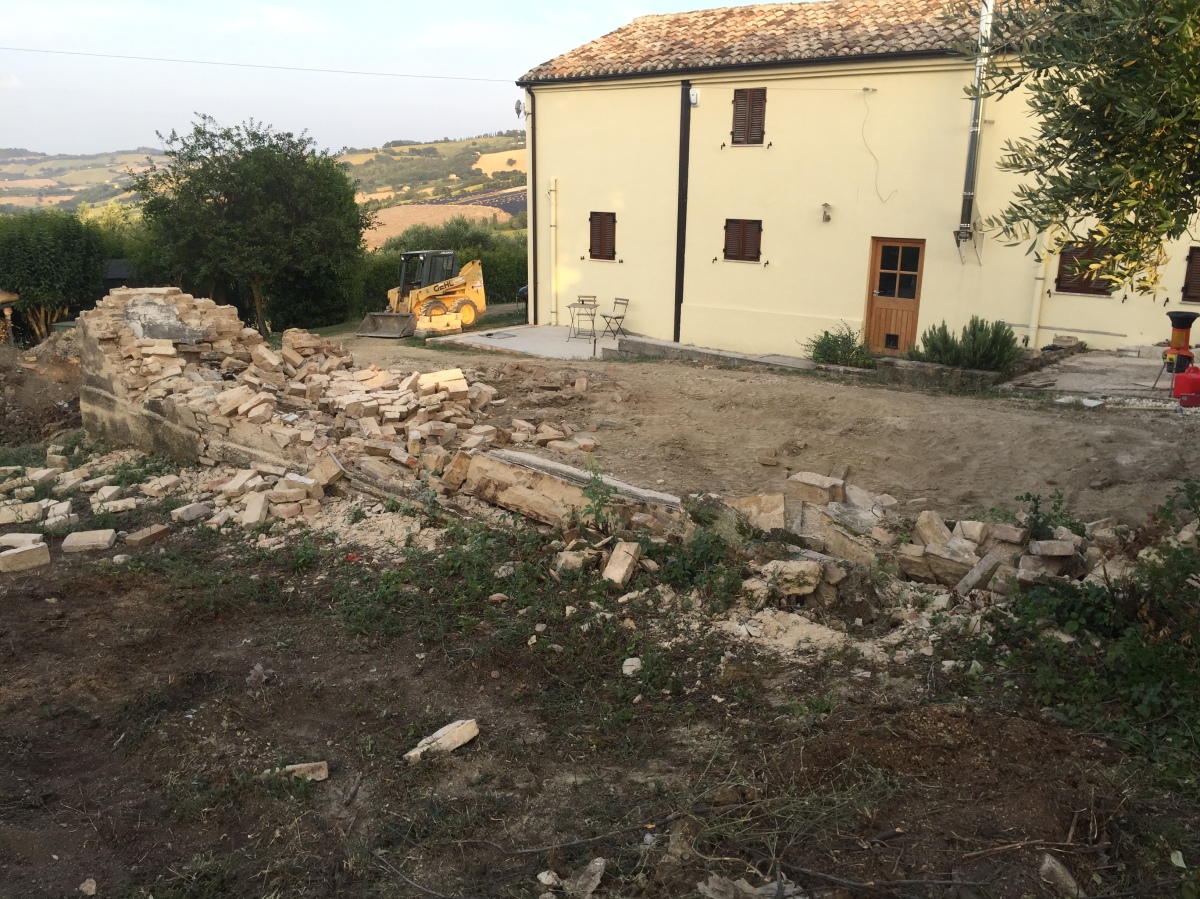 Although Mr Blue-Shirt had sent me twice-daily photo updates on his progress while I was in the UK and given me and blow by blow accounts over the phone, they still hadn’t truly prepared me for the reality that greeted me when I returned home. I stood at the back door, my suitcase still in the middle of the kitchen floor and the cats weaving about my legs, and looked out towards where the decrepit and toxic pigsty had once stood on the slight rise to the rear of the house. When I left, all the makeshift cladding had long since been ripped off, Mr Blue-Shirt had carefully taken down one and a half outside walls and all the internal dividing walls brick by brick, salvaging all the materials for use elsewhere. He had removed the large curved coppi roof tiles from half the roof and stacked them on a pallet, and many of the timber uprights and beams had been removed and then stowed in the legnaia (woodstore) for chopping into firewood. It was still recognisably the loathsome pigsty, however, albeit a mortally wounded version of its former self. But now – at last – it had gone. Completely gone. Disappeared. Not a single brick or beam or roof tile remained. Nothing. Just a bare patch of roughly levelled soil in front of the previously almost invisible pair of tall olive trees up by the front fence, and beyond it a newly revealed view of the uphill section of the field that surrounds the house. I could now see on to the trees that line the lane running down the valley, then over the road that runs up into the village to the tops of our neighbours’ olive trees and finally round to the western sky from where the late afternoon sun cast its slanting rays through the line of olive trees along our northern border that I had never seen from this angle.

I really don’t know how Mr Blue-Shirt had managed it. I’m lost in admiration for his unswerving determination in razing this blight on our lives to the ground in a matter of days. And in mid-August at the absolute height of this hotter than usual summer. Doing an early and a late shift certainly helped. After a quick coffee just after 5am, he’d start work in the cool, milky dawn, the throaty splutter of the ageing digger he had hired for this part of the job breaking the stillness of the morning air. He’d stop for breakfast at about 9am, then get straight back to the slow, repetitive, strength-sapping cycle of labour that made up his days. After some minutes of pushing and heaving with the digger would come the dull crash and cloud of thick buff-coloured dust as the section he’d been wrestling with gave up the unequal struggle. Mr Blue-Shirt would then jump down from the cab to retrieve any re-usable bricks from the latest pile of debris and stack them on the pallets behind the well. After a brief pause to drink the first of many pints of water with which he held dehydration at bay, he would then climb back into the cab to scoop the remaining rubble up into the steel-fanged digger bucket, hopping out again to top it up by hand (and gulp down more water), and finally trundle round the eastern end of the house to tip the contents into the back of the fifteen-tonne truck parked on the drive. Then it was an about turn (or a ‘neutral turn’, as it is known in the track vehicle trade: when one track rotates forward and the other rotates backwards causing the vehicle to rotate on the spot) to return to the pigsty for the next round of push, heave, retrieve, (gulp,) stack, fill, (gulp,) carry, tip. And the next, and the next. He’d keep at it until about midday by which time the temperature was well into the thirties and any last patch of shade had long since vanished. And then: stop.

Boots and socks abandoned at the back door, increasingly disreputable straw hat tossed on the work surface and the dust and grime shaken from his sweat-drenched T-shirt, Mr Blue-Shirt would down yet more water before padding across the cool kitchen tiles and into the inviting gloom of the tightly shuttered sitting room. Siesta time. He’d flop onto the sofa, not caring that he was sprawled across the cats’ throw, and within seconds fall into the deep sleep that comes with hard physical labour. A sleep so deep, in fact, that on a couple of occasions he was completely oblivious to the arrival of Alessandro the building contractor. Every other day or so, Alessandro would rumble through the gate in an empty fifteen-tonne truck to swap with the full one crouched low on the drive that he would then drive down to the quarry for its load to be crushed into building-grade hardcore.

After a couple of hours’ sleep Mr Blue-Shirt would pull on a fresh T-shirt, rustle up a hearty, labourer’s lunch for himself and potter around doing gentle indoor jobs while he waited for the sun to move round from south to west. Then late in the afternoon when the shade had begun to creep across the ruins of the pigsty and the temperature had eased back a couple of degrees, Mr Blue-Shirt would venture back out for the late shift and several more rounds of push, heave, retrieve, (gulp,) stack, fill, (gulp,) carry, tip. On and on, back and forth until the golden light turned to bronze, to purple, then back to milky grey.  With dusk gathering, the digger would finally fall silent, giving way to the song of the crickets, and Mr Blue-Shirt would clamber down from the cab, his work done for another day.

And so it went on, day after day until not a trace of the pigsty remained and the by now exhausted Mr Blue-Shirt could bid farewell to his steel-fanged friend. Between them they had made some 210 trips from pigsty to truck and back, and shifted 105 tonnes of rubble. Mr Blue-Shirt had also salvaged and stacked some 1200 roof tiles and 1800 bricks. Job done. Pigsty gone. The healing continues.