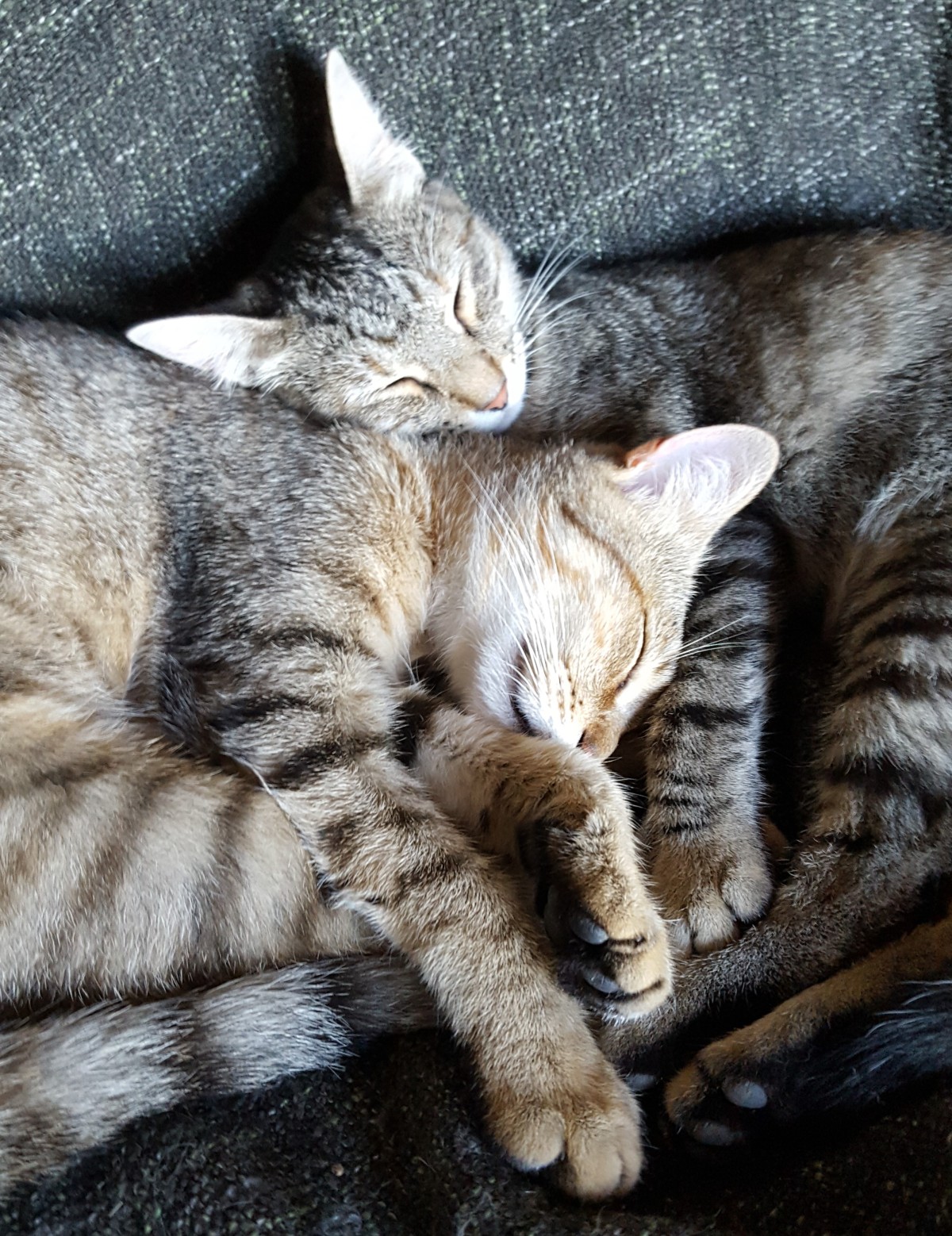 And then it struck me: what about Tilly? We had just finished burying her brother Stanley, whose small, stiff body Mr Blue-Shirt had found on the road earlier that morning, his skull crushed by a passing car. By that time, Tilly had already disappeared through the cat flap for another day’s butterfly chasing, lizard hunting and tree climbing, presumably unaware of what had befallen her constant companion and partner in crime. While we were still kneeling in the car port stroking Stanley’s inert form, his thick brindled fur with its ginger-tinged highlights now strangely cold, I thought I glimpsed her dark tabby form among the olive trees a couple of times and I did fleetingly wonder whether she had somehow sensed that something terrible had happened. Poor Stanley and where to bury him had dominated our thoughts, though. Now, as we stood at the spot beneath a small pear tree in the far corner of the garden where Stanley now lay at rest within the crumbly dun-coloured soil, my own sadness at his loss shifted to concern for Tilly and the life-changing effect it would have on her.

I reckoned that they couldn’t have spent any more than three or four hours apart since they had been born barely a year earlier. As tiny kittens they had suckled together from their mother and developed their cat-craft together as part of an extended family of siblings and cousins. When they first came to us as four- or five-month-old juveniles, they comforted their own and each other’s fears and anxieties at all the unfamiliarity by cuddling up side by side like a pair of tabby slippers in a succession of refuges, peering out at us from two pairs of golden, suspicion-filled eyes. First it was the dining chair in the far corner of the dining room where we spent long spells kneeling under the dining table trying to coax them out. When they had gained a little more confidence, they graduated to one of the armchairs in the snug or the leather-covered stool on the landing, although they mostly still shrank from our touch. As their confidence grew, they started to join us in the sitting room, Mr Blue-Shirt and I on one sofa and the two of them on the other to start with, and gradually allowed us to stroke and scritch them – although not yet to hold or cuddle them. And so it progressed over the tail-end of winter, testing boundaries, testing themselves and testing us – but always as a pair; each always the other’s wingman, back-up, watch-out and fall guy.

It was the same once they were settled in the house and confident in our company and we finally allowed them outside to discover a whole new world of adventure. Straight after breakfast, we would hear the distinctive double ‘ba-dap, ba-dap’ of the cat-flap, and that was them gone for the morning. From time to time we’d catch sight of them galloping across the grass, rolling around on the drive or chasing each other up olive trees. Wherever one was, the other was seldom further than a few metres away, and invariably in hot pursuit. Then once they’d lunched side by side, both munching contentedly from their respective bowls, they’d hop up onto the sofa, give each other a thorough wash, and then cuddle up together for an afternoon nap in an eight-pawed, two-tailed tangle of tabby fur. Having re-charged their batteries, they’d be off again as dusk settled. But by the time spring was turning to summer, they had become sociable, entertaining and affectionate house-mates who sought out our company, often coming to join us as we dined in the garden. While we ate, they would alternate between chasing moths or stalking various tiny rodents and lolling about at our feet, wanting to have their stripey (Stanley) and spotty (Tilly) tummies tickled. Then, as we headed in for the night, the two of them would head off to who knows where for a night’s important cat-business, only returning at dawn when we’d be woken by them calling for breakfast in a duet of urgent miaowing, and the daily cycle would begin all over again.

But now Tilly was on her own. She spent much of that first day without her brother outside, surely searching for him in all their usual haunts, and we were worried sick. But as night closed in, she finally re-appeared looking stricken and confused and utterly lost. Our hearts nearly broke for the poor wee creature and we smothered her in cuddles and comfort and did our human best to soothe her all-too-obvious pain. She wouldn’t rest, though. Once in, she roamed the house, systematically checking every room, every nook and every cranny. Into the small hours we could still hear her soft paws padding back and forth across the wooden floors, her mournful calls amplified by the stillness of the night. We lay there, racked with doubt: should we have shown Tilly her dead brother’s body? Should we have allowed her time with him to work out what had happened? But if we had, would she have thought we had taken him from her? By now we were undoubtedly both over-thinking everything and projecting our own sorrow onto her. But one look at her sweet little face with its long white whiskers and distinctive black ‘M’ between her huge golden eyes and her distress was plain to see.

And so it has gone on, night after night. We’ve been terrified that she might disappear altogether; just head off into the fields in a never-ending search for her brother and soul mate. To our huge relief, though, she has continued to come home and seems to find some comfort from all the extra attention we are giving her, inadequate though it seems.  She still patrols the house, however, and still calls for Stanley. And when she receives no answer, she once more seeks refuge on that dining chair in the far corner of the dining room, the same armchair in the snug or the leather-covered stool on the landing. She sniffs the last traces of Stanley’s scent, curls up, and continues the endless wait…