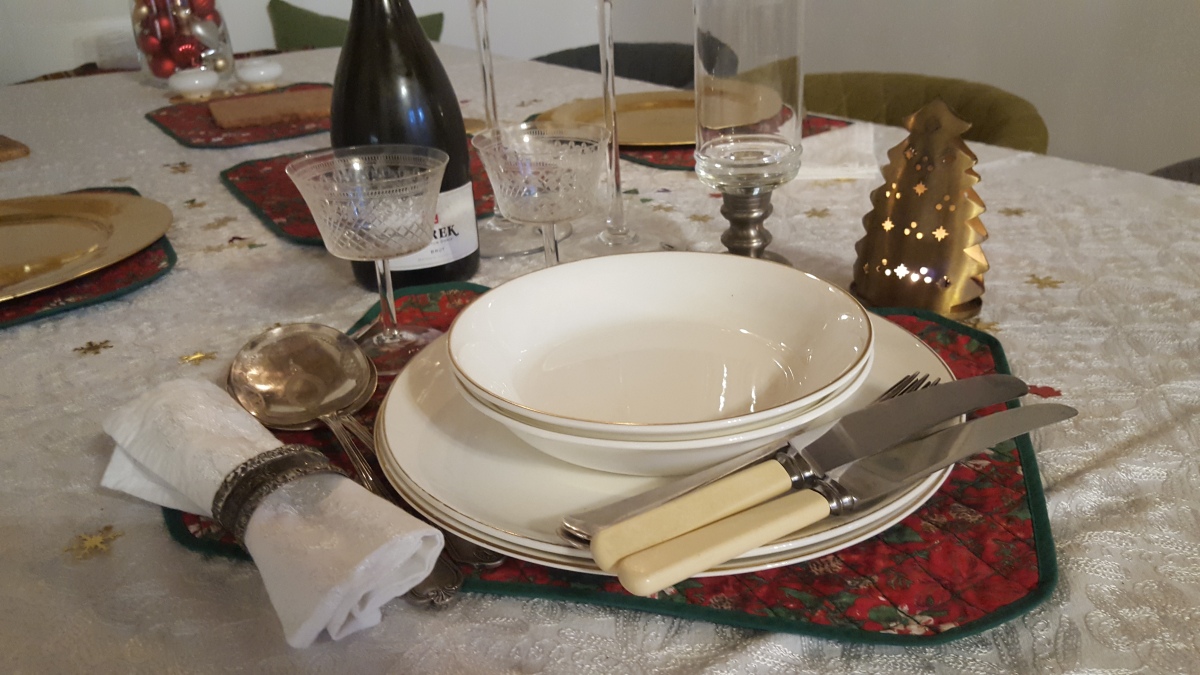 Decluttering has been ‘a thing’ for well over a decade now. The process of getting rid of accumulations of unnecessary objects from one’s home with a view to achieving a soothing, minimalist environment and a calm, stress-free state of mind has spawned countless books, created online ‘influencers’ and turned decluttering gurus such as Marie Kondo into multi-millionaires. I have to confess, however, that I’ve never much subscribed to the tenets of this very millennial cult, partly because we are not prone even to collecting, never mind hoarding – fifteen years moving from place to place with the armed forces saw to that. But having lost so many members of first my family and now Mr Blue-Shirt’s, I am more certain than ever that there is a place for, and even a value in ‘stuff’.

With Christmas coming only weeks after the funerals of both Mr Blue-Shirt’s mother and then his father, there were two yawning voids at our table this year. Metaphorically speaking, you understand: we didn’t religiously spend every Christmas together – and couldn’t always have done so, even if we had wanted to. The thing is, though, whether physically present or not, because his folks were always part of our lives, they were always involved, always part of our celebrations. There are the family traditions we adopted from childhood. For years now Mr Blue-Shirt has relied – tongue firmly in cheek – on his beloved dad’s all-purpose get-out clause “I’m doing the stuffing!” to try and avoid other less interesting Christmas chores. Just as we have long adhered to my parents’ tradition of opening presents only after the Queen’s Speech, and having bubble and squeak for Boxing Day lunch. And then there would be the swapping of recipes, the advice on wine, the calls and messages on Christmas morning, and the exchange of carefully selected gifts and cards. Until this year, of course.

What did much to ease the almost overwhelming sense of absence and loss, though, was in fact ‘stuff’. Our Wedgwood Christmas crockery, we realised over our roast turkey, had been his parents’, the engraved EPNS serving spoons his grandma’s, Mr Blue-Shirt’s beer glass his father’s, my silver napkin ring his mother’s. Among the jumble of battered, mis-matched utensils we had used to cook our lunch had been his mother’s – or mine. Indeed, it occurred to us that our bone-handled cutlery had been my parents’ Sunday-best, and that we had sipped our Christmas fizz from my grandparents’ 1930s, paper-thin champagne coupes.

What we ate and drank from, they had too; what we had touched and held, they had too. It comforted us, it connected us. It brought the past into the present; it made what we had lost feel less distant.

I have always been a fan of William Morris’s golden rule of style: “have nothing in your house that you do not know to be useful or believe to be beautiful”, to which I would now add a third category: …or nothing that you do not recognise to have meaning. For what the likes of Marie Kondo would doubtless condemn as mere ‘stuff’ means the world to us, and we wouldn’t part with it for anything.

Merry Christmas and Happy New Year to one and all.