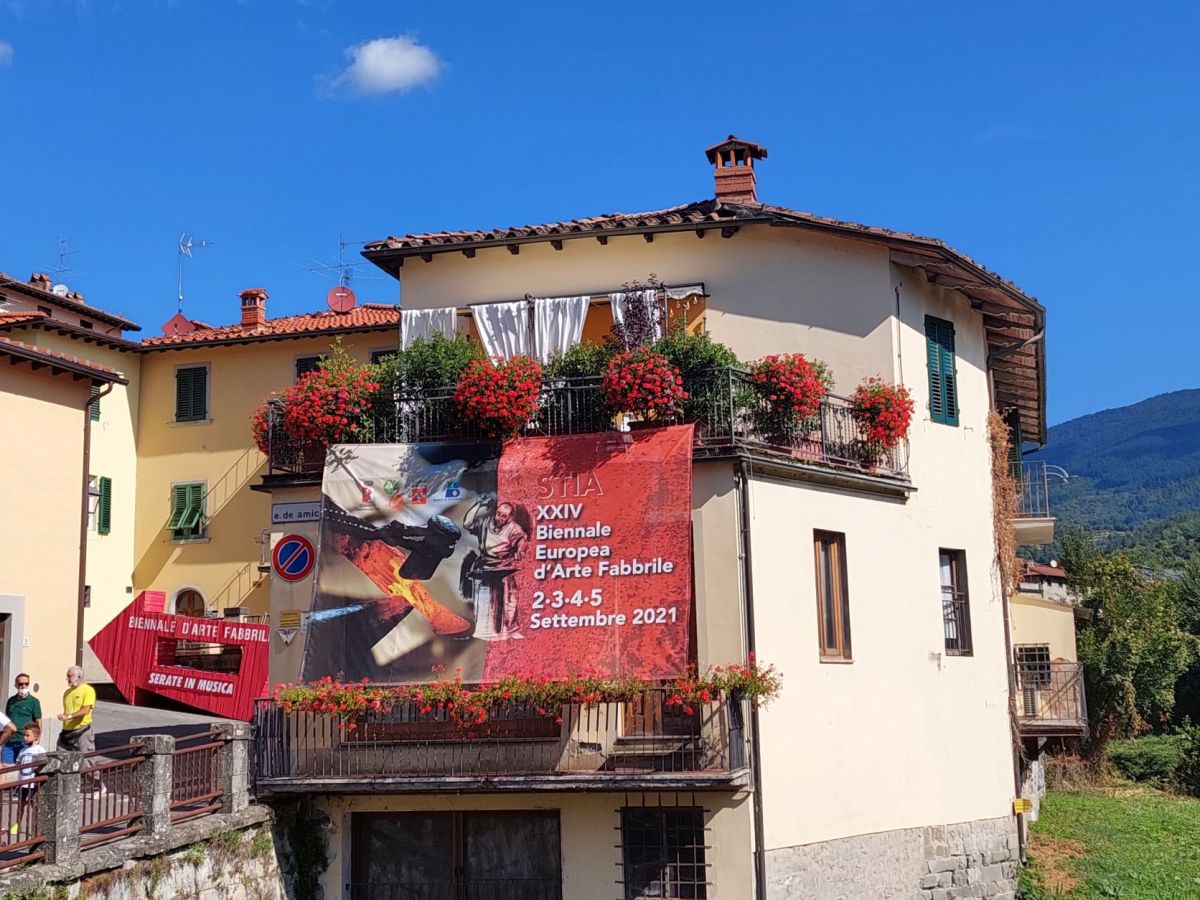 Our principal reason for choosing Tuscany as the destination for our brief summer break is that it is the home of the Biennale Europea d’Arte Fabbrile (European Blacksmithing Biennial) which for over forty years has been held in Stia, a small and dignified medieval town nestling in the forest-clad hills of the Casentino area of Tuscany about 60km east of Florence and 50km north of Arezzo. We first started going in 2007, and while we were running our blacksmith’s forge, it provided the ideal opportunity for an extra trip to Italy. Since we relocated to Italy in 2017, though, things have done a complete volte-face and this four-day international festival of forging now provides the ideal opportunity to catch up with the blacksmithing scene. And even though we appreciated that essential anti-Covid measures were likely to compromise some aspects of this large and complex event, we were just delighted it was able to go ahead at all, and were even more excited about meeting up with a few of our blacksmithing friends whom we had not seen since well before the pandemic.

After checking in at our usual hotel in the historical centre, we wandered up to the main square to register our attendance, have our Covid Passes scanned and be given the fluorescent green wristbands that would then give us access to every element of the event without further checks being necessary, then it was straight across to the forging area that takes over most of the rest of Piazza Mazzini. We were pleased to see that along the customary row of glowing hearths, grubby-faced blacksmiths were already hammering furiously at their anvils to produce their entry for the competition that is the raison d’être of the event. Using just the material provided, participants have three hours in which to produce a piece of work in response to a set theme that is announced a month in advance. In the circumstances, few had been surprised to find that it was a famous quote from Dante’s Divina Commedia – “E quindi uscimmo a riveder le stelle” – that refers to the return to normality after a period of anxiety, danger or difficulty.

Apart from the fact that we now had to show our wristbands to enter the viewing area, and could only stand in the space opposite the forges where normally there was a bank of seating to watch from, it was all very much business as usual, with plenty of spectators avidly following what was going on. Meanwhile, the customary unlikely mix of tattoo-ed and dreadlocked smiths, stiff-hipped grannies, smart couples and self-conscious teenagers milled about in the remainder of the shady square, simply taking in all the sights and sounds and comings and goings, and it was good to see that even in these difficult times, the event had, as ever, attracted almost as many ‘lay’ visitors as blacksmiths.

Mr Blue-Shirt was planning to forge a piece he had designed with our pal Bill who was driving down through France from the UK. So we found ourselves looking out for his familiar lanky form and floppy hat as we wandered down the hill for a quick coffee at the quirky bar by the bridge over the Arno that provides the best people-watching spot in town. And as we drained the last of our cappuccini, I caught sight of him, wheeling a suitcase across the road.
“There he is!” I yelped excitedly, suddenly all too aware that this was the first time in two years we had seen any of our UK friends in the flesh.
“And there’s Melanie, too,” said Mr Blue-Shirt, pointing to the equally familiar figure of Bill’s wife in one of her trademark colourful kaftans walking up from the car park. “They look a bit frazzled – Bill said they were setting off at dawn from down by Grenoble.”
“Yes, let’s leave them to get settled in and arrange to meet up later.” I said, trying to be calm and sensible – and to loosen the knot that had formed in my throat.

With Bill and Melanie’s arrival giving us an extra spring in our step, we continued on to Piazza Tanucci in the heart of the old town. This year, there were fewer of the dramatically lit large sculptural pieces normally displayed along one side of this narrow square lined with tall palazzi, and the casual seating made from pallets, scaffolding planks and re-purposed oil drums was very obviously much more spread out than usual. But the stage with full sound and lighting rig was still there: a good sign as it meant that live music was still set to form part of the evening programme. Then from the far end of the square, we headed down the narrow alleyway that leads to the lanificio, the semi-restored woollen mill whose huge contemporary gallery space houses one of the event’s other key elements, a professionally curated exhibition of forged ironwork.

“I think that’s Luc!” exclaimed Mr Blue-Shirt as we approached the forging demonstration area outside the mill. And sure enough, there was our Belgian friend whom we had worked with at various international events over the years, his distinctive shock of thick silver hair standing out among his team of black-clad smiths hammering away at what we later learnt was sculptural piece for the local children’s playground. We waited at the guard-rail for a few minutes, not wanting to interrupt Luc while he was working. Eventually he glanced up, looked back down at his anvil – then did the biggest double take ever, all but dropped his hammer and ducked under the rail to envelop us both in a massive bear-hug that soon also included Luc’s wife Christine who had suddenly appeared from nowhere. Gradually we let go of one another, our eyes glistening with barely held back tears, and hastily exchanged news, assured each other that we had got through the pandemic OK and promised to meet up for a drink . Then, amid much back-slapping and kiss-blowing, we let Luc and Christine get back to work while we carried on up to the exhibition, babbling excitedly about how fantastic it had been to see them both.

We made a quick tour the exhibition, noting that while there were some fabulous pieces, there were far fewer exhibits than normal – although whether it was simply a sign of the times or a deliberate tactic to keep numbers in the gallery down, we couldn’t decide. But we didn’t really take much in after bumping into Luc and Christine. For this had made us keener than ever to see Bill and Melanie, so after a rapid exchange of messages we agreed where and when to meet for dinner.

They were already sitting at one of the long trestle tables outside when we arrived at the bar by the Arno and leapt to their feet the instant they saw us, their arms flung wide in greeting. And only after a prolonged frenzy of hugging and handshakes (and discreetly dabbed eyes) did we manage to curb our childlike excitement and sit down and talk like proper grown-ups. Without interrupting our conversation, we soon slipped from drinks to dinner, and continued talking and laughing, eating and drinking and then talking and laughing some more until we were the only people left in the restaurant and the charming staff politely made it plain that it was closing time.

The next couple of days were spent drifting from café to gelateria and from bar to restaurant together, catching up properly with Luc and Christine, and simply enjoying being part of this incredibly sociable gathering once more. We did also manage to check out the drawing and design competition and the children’s forging station, attend a couple of lectures and take a proper look at the exhibition, none of which turned out to be as compromised by the anti-Covid measures as we had feared. Best of all, though, while overall participation was definitely lower than usual, a good 70 or so competition pieces ended up on display along one side of Piazza Mazzini, forged by around 85 smiths from over a dozen countries including Russia, the USA and Japan, while the UK sadly had just two representatives this year, namely Bill and Mr Blue-Shirt. Over the course of their three hours, they produced, with a little added muscle power from a kindly American smith, a piece that showed the virus being crushed into submission by a large hammer – one of a number of entries that made direct reference to Covid.

We agreed on our way home to get ready for Bill and Melanie to come and stay for a few days that our trip had been all that we had hoped it would be. We had managed a few days away, we had found the event that we remain so fond of in surprisingly rude health, Mr Blue-Shirt had been able to swing a hammer for the first time in four years, and – best of all by miles – we had had the chance to spend proper face-to-face time with some very dear friends. All of which left us feeling more energised and connected than we had done in months, and that we truly had in some ways ‘emerge[d] to see the stars once more’.

Note: ‘And so we emerge to see the stars once more’ is a rough translation of “E quindi uscimmo a riveder le stelle”, the quote from Dante’s Divine Comedy that provided the theme for the forging competition.