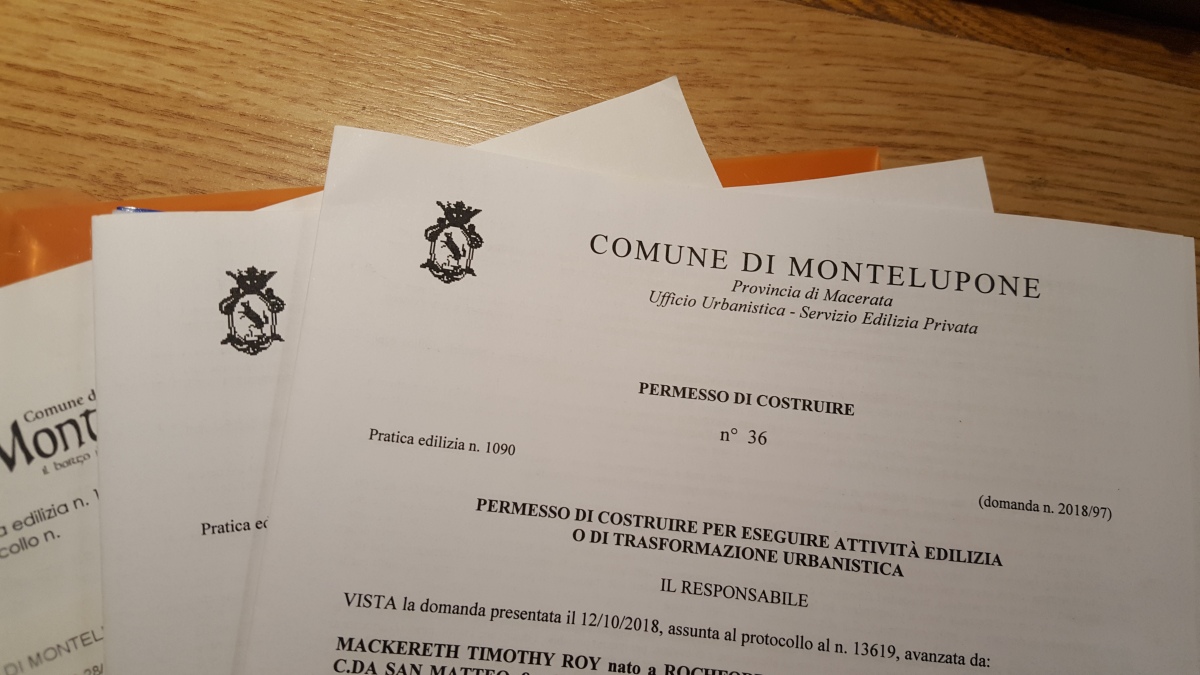 While we might not quite be in the starting blocks, we are at least warming up on the track. We have recently been granted permission to demolish the crumbling pigsty behind the house that currently serves as Mr Blue-Shirt’s workshop and replace it with a modest holiday cottage for visitors. As one might expect in a place where wrapping things in red tape is practically an art form – I even had to provide my codice fiscale (analogous to my NI number in the UK) at Ikea the other day just to claim my €15 token for having brought our Christmas tree back for composting – it had been a protracted process.

One of the many features that originally attracted us to the house was that it came with an outbuilding which in turn came with planning permission (permesso di costruire) to convert it – into an art studio, admittedly, but one man’s art studio is surely another’s open plan holiday cottage. By the time the house was ours, though, the clock was running down, so getting the planning permission extended became a priority since if it lapsed, we would have to begin the whole application process from scratch: something we wanted to avoid if at all possible. Our solicitor Giovanna got straight on the case, and was soon able to reassure us that our anxiety was unwarranted. The vendors’ architect had submitted a confirmation of the commencement of works a year earlier, and this had automatically extended the planning permission by a further two years. Now you might be a tad surprised that we were unaware that building work had begun. You might be less surprised, however, if I explained that in order to secure a confirmation of commencement of works certificate, it is necessary to do no more than stick a shovel in the ground and, ideally, erect a few metres of orange plastic netting.  And indeed, some prickly tramping around in the sprawling thicket of brambles behind the pigsty did indeed reveal a few tatty fragments of sun-bleached orange plastic. No matter: it gave us a year’s grace.

The vendors’ plans were not significantly different from what we wanted to build, but there were certain features that would need to be changed to create living accommodation rather than a studio. So it should now just have been a matter of applying to make the required changes, right?  Oh no: far too straightforward; far too Anglo-Saxon. The first hurdle was that while the property had automatically been transferred into our names on completion of the purchase, this did not mean that the planning permission had. So, before our architect, Silvano, could move anything forward, we had to get the planning permission transferred into our names. Which naturally involved putting together another bundle of copies of every conceivable document that proved that we were who we said we were and owned what we said we owned. In duplicate. Obviously.

Silvano presented us with the freshly-issued document – now in our names – a few weeks later when he came round to go through the changes that we wanted to make, with a view to him producing formal drawings to submit to the planning department. He’d long been aware of the type of changes we had wanted to make, and while sorting out the transfer of the permission into our names, he had discussed them informally with the planners.
“They reckon it will be better to let the current permit lapse and make a new application,” he informed us.
“But we spent ages making sure that the permission wasn’t about to lapse precisely so we didn’t have to make a new application!” I exclaimed.
“I know. I’m as surprised as you.  They say it’s because you want to create living space and the existing permission is for a studio.”
“But the footprint is exactly the same. We only want to change the internal layout and add a couple of windows.”
“It doesn’t matter. It’s ‘residential’ so different rules apply. They have to think about pressure on local services and so on.”
“But it’s a holiday cottage – not for ‘residents’, for visitors!…”
“It still counts as residential, though.”
“…Visitors who will spend money here!”
“Planners aren’t interested in that. Look, I know it’s mad, but it’s part of a new law that’s just come in…” He shrugged apologetically and raised his hands as if in surrender.
“So why have we just gone to the trouble of transferring the existing planning permission into our names?” asked Mr Blue-Shirt.
“Well, I’m not entirely sure myself,” said Silvano. He looked slightly sheepish: he is a real stickler for detail and process (very un-Italian, but very comforting for us) and also knows our local planners quite well having successfully navigated the planning process for the conversion of the property from derelict farmhouse to a generous four-bedroom home. “But I think it is something to do with keeping the file open so there is some kind of planning timeline. They said it would help, though.”

So it was back to the drawing board – literally. Over the next couple of weeks, Mr Blue-Shirt upgraded his concept sketches to dimensioned drawings, and there then followed a slew of decisions on building materials, utilities, finishes and so on that would enable Silvano to draw up the definitive plans containing every last detail required by the planners.

In autumn, we had a meeting with Silvano to sign off the final drawings he would submit with our application.  We were excited to see the ideas we’d been throwing around for months crystallised into this composition of lines, figures, and elevations that bridged the gap between imagination and reality.  “How long do you think it will take,” Mr Blue-Shirt asked as we re-folded the bundle of drawings. Silvano checked the date on his watch. “I don’t think it will be before Christmas,” he said. A good ten weeks, then – assuming it all went through smoothly. Now well-versed in the glacial workings of Italian bureaucracy and having long since got out of our systems the urge to cry “But in the UK….” when presented with such timescales, we merely shrugged. After all, it was not as if we could realistically start work in winter anyway. In fact, if permission was granted towards the end of the year, then this would give us winter-proper to get quotes for the works and select a contractor in time for ground to be broken in spring. We just had to hope they wouldn’t have any queries or objections…

As it turned out, Silvano’s prediction was pretty well spot. In early January we received notification that permission would be granted – and thanks to Silvano’s thoroughness, with no amendments or conditions. This only left one more visit to the planning department before we reached the finishing line: to pay another round of fees (naturally) and get a couple of tax stamps from the newsagent across the square, all of which Mr Blue-Shirt achieved without incident. And in return for his efforts he was duly rewarded with our formal Permesso de Costruire. In duplicate. Obviously.